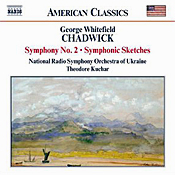 I've read that around the turn of the twentieth century George Whitefield Chadwick (1854-1931) was America's most-prominent composer. Hard to believe, considering that today most ardent music lovers have hardly encountered him and that almost everybody else has never heard of him. The fact is, he didn't have a lot of competition around that time, with George Gershwin, Aaron Copland, Samuel Barber, John Cage, Walter Piston, Ferde Grofe, Virgil Thomson, and the rest coming after him. Chadwick was a conservative neo-Romanticist whose main rivals at the time seem to have been John Philip Sousa in an entirely different medium; the more progressive Charles Ives, whom hardly anyone could understand; and Edward MacDowell, an old-timer by then.

This Naxos issue couples two of Chadwick's most-popular pieces, the Second Symphony and the Symphonic Sketches on the same disc. Both of them are lightweight stuff, to be sure, but of the two works, it's the Symphonic Sketches that shows the most spark, at least under Maestro Theodore Kuchar and the National Radio Symphony Orchestra of Ukraine. 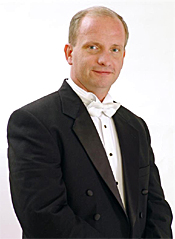 The Symphony No. 2 begins in a rather lackadaisical fashion, no matter what Maestro Kuchar and his players try to do with it; but it soon picks up with a bouncy little Scherzo, a Mendelssohnian ditty that the composer introduced on its own and we often hear played by itself these days. There follows a solemn, drowsy slow movement that builds to a grand climax and a Finale that is quite jaunty, if still featherlight.

The more-provocative Symphonic Sketches really work like a small symphony, divided into four brief tone poems: "Jubilee," a bombastically festive piece; "Noel," a slow, tranquil movement; "Hobgoblin," the most creative composition on the disc and very reminiscent of Mendelssohn again or Mussorgsky; and "A Vagrom Ballad" ("Vagrant's Song"), a kind of impressionistic, tongue-in-cheek affair. Conductor Kuchar's way with things is to let them all unfold at their own pace, with, as I say, the "Hobgoblin" the most atmospheric.

The sound the Naxos engineers provide seems oddly bunched up in the center of the soundstage and lacks a real dynamic punch. Otherwise, the sonic presentation serves the music well, being slightly lightweight itself.

Email ThisBlogThis!Share to TwitterShare to FacebookShare to Pinterest
Labels: Chadwick