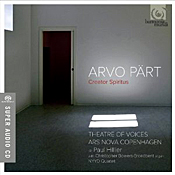 Estonian composer Arvo Part (b. 1935) has long been a force unto himself. A writer largely of sacred music, he most often follows a minimalist course, not only observing the manner of Gregorian chant but using a compositional approach he devised himself, which he calls tintinnabuli, Latin for "bells."  Remember the "tintinnabulation" in Poe's "The Bells"? Same kind of thing, if not so obvious.  Despite (or perhaps because of) the oddities of his compositions, Part has become one of the leading composers of the past forty years.

I know there are some critics who are immune to what they may consider the repetitious ruminations of Mr. Part's New Age spirituality, but I admit a liking for the man's approach, combining as it does ancient tunes and texts with modern and inventive styles, rhythms, and tones. The fact is, this Part disc and many others get to me. The music is inspiring and dreamily poignant.

The present album, Creator Spiritus, is the 2012 product of conductor-director Paul Hillier and his Theatre of Voices, wherein Hillier has collected together some of Part's choral and instrumental chamber music drawn from different periods in the composer's career. The record jacket describes the music as "a powerful recording of ethereal sacred music," and I certainly won't argue the point.

The program begins with "Veni Creator" ("Come, Creator Spirit," 2006). This brief selection for choir, organ, and chamber orchestra sets the mood for the album: Under Hillier and his forces, it is very solemn, very still, very placid, and very moving.

Part based the second track, "The Deer's Cry" (2007), on a piece by St. Patrick from 433 A.D., and it is even more ethereal and uplifting than the first work. Hillier follows that with "Psalom," played by the NYYD Quartet. It is a leaner composition than the preceding items, the melodies haunting in their simple dignity and refined in their performance.

I think you're getting the idea. Of the rest, "Most Holy Mother of God" (2003) for choir alone is among the most affecting and most-conventional sounding of the lot, although it uses a single line of text repeated over and over in minor variations. "Peace Upon You, Jerusalem" (2002), a setting for Psalm 122, also sounds fairly traditional yet contains more expressive moods than many of Part's other works. 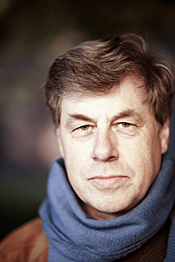 A booklet note for "Ein Wallfahrtslied" ("A Pilgrim's Song," 1984) struck me as curious. The note suggests "One can obtain an interesting overview of the music by using the fast forward button on a CD player." I'm not sure if the writer was kidding or not, but, well, yes, by fast-forwarding you would get an overview, while sort of missing the point of the music, no?

The concluding work, "Stabat Mater" (1985) for quartet and voices, is by far the longest piece on the program. Part based it on the familiar medieval poem, and it demonstrates his use of "tintinnabuli" in the way the words fade into silence like the sounds of a bell.

Obviously, this is sacred music for quiet contemplation, and as such I cannot imagine its being any better performed than here by Paul Hillier and his players. It's a lovely album.

Harmonia Mundi recorded the music at Garnisonskirken, Copenhagen, Denmark, in June of 2010 for playback via hybrid stereo/multichannel SACD. As I usually do, I listened to the stereo layer using a Sony SACD machine, where I found the sonics warm, smooth, and resonant, yet with plenty of detail and realism. Because the music is principally gentle and otherworldly, there is little reason for a wide dynamic range or a sledgehammer impact. Nevertheless, the performances sound just right for the occasion, which is the main thing. Sometimes, depending on the need, there is more reverberation in the acoustic setting than at other times. Naturally, it would probably sound even more open, airy, and reverberant in multichannel; still, it sounds pretty good in two-channel stereo as well.

Email ThisBlogThis!Share to TwitterShare to FacebookShare to Pinterest
Labels: Part