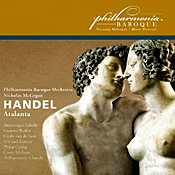 Nobody does baroque better than Nicholas McGegan and his Philharmonia Baroque Orchestra. And nobody does Handel better than McGegan and the PBO, either. So, there's no wonder the team do such a good job with Handel's Atalanta.

George Frideric Handel (1685-1759) wrote the three-act opera Atalanta in 1736, basing it on stories of the legendary Greek athlete of the same name. Although you often hear singers perform the number "Care Selve" from the work, hardly anybody performs, let alone records, the complete opera these days, and, in fact, the only other stereo recording of it I'm aware of is by McGegan himself, issued by Hungariton in the early Nineties. I haven't heard it, but I can't imagine its being any better than this new one, which the Philharmonia Baroque have released on their own label.

I doubt that anybody in our own time or in Handel's came to Atalanta for its story. Suffice it to say that the plot is rather slender. It's a pastoral love story set in ancient Greece and deals with a young man, King Meleagro (Susanne Ryden), chasing a young woman, the Princess Atalanta (Dominique Labelle) of Arcadia. But to complicate things, as operas and plays must do, he's pretending to be a shepherd and she a shepherdess, and neither thinks the other good enough. Then, to complicate matters further, there is another couple lurking about, a real shepherd and shepherdess.

No, folks go to these kinds of shows now as then not for the narrative but for the music, which in this case is charmingly light, graceful, lyrical, and easy to like. Unfortunately, it may be just as easy to forget, and for listeners not used to such things, the Baroque style of music and singing may get a bit monotonous after a while. It doesn't have, for instance, the earthy, robust lustiness of something like Handel's contemporaneous ode Alexander's Feast, which, coincidentally, I had the opportunity to hear live with the PBO and several of the same soloists as here just a few nights after listening to this disc. I vote for Alexander, a much bigger moneymaker for Handel, then and now.

The fact is, Atalanta was not a great opera in Handel's day and, naturally, doesn't compare to operas in the later traditions of Mozart, Beethoven, Verdi, or Puccini. With the exception of the aforementioned aria "Care Selve," there are few notable tunes. What's more, almost nothing lasts longer than a few minutes, the number of tracks on each disc--twenty-six and twenty-eight--giving you some idea of how quickly each song comes and goes. This may be a blessing for those listeners with short attention spans, or it may be a curse for those hoping for something more substantial. 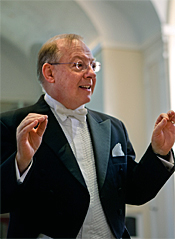 Nevertheless, Maestro McGegan, an old hand at these things, keeps the production moving along at a healthy clip, the orchestral accompaniment always lively and the singing splendid, especially from Ms. Labelle and Ms. Ryden, although for that matter they all do good work. I would not be going out on a limb declaring this performance second to none in the music.

The PBO recorded the performance live in September, 2005, at one of their favorite venues, First Congressional Church in Berkeley, California. If you enjoyed the sound of their critically praised live recordings of Berlioz, Handel, and Haydn, you'll no doubt enjoy this set as well. Personally, I don't care all that much for live recordings, and this one demonstrates why. The sound is slightly bright, forward, and thin, with a bit too spacious an acoustic for my taste. Additionally, we hear background noise from the performers shuffling around on stage and from the audience, who burst into applause after every number as is the usual wont of opera patrons. Still, there is excellent clarity throughout the set, with well-extended highs and plenty of air around the voices and instruments. So, yes, if you enjoy the sonic experience of an all-out live performance, with everything that entails, this one fits the bill. Myself, I'd rather just do with the music.