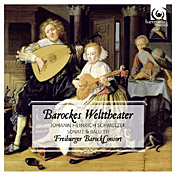 The opening percussion sets the tone for the album. You know in a flash you're in for one wild and wonderful ride through the seventeenth century.

So, who was this guy Schmelzer, and why should we care? He was Johann Heinrich Schmelzer (c. 1620-1680), an Austrian composer and violinist who eventually worked his way up to serve as Kapellmeister ("conductor," "choirmaster," "music maker") in the Habsburg court. Why the interest in him? Because the Freiburger BarockConsort specializes in the music of less-frequently played composers of the seventeenth century, and Schmelzer fits the role perfectly. At least, he's not frequently played these days. In his own day, as a violinist he was apparently quite popular and as a composer had a significant influence on later musicians and composers of the era.

The program opens with Serenata con altre arie ("Serenade with other tunes") in five movements. The piece demonstrates Schmelzer's versatility and the BarockConsort's adaptability and virtuosity on a variety of instruments. You'll hear a kettledrum, bells, guitar, just about everything in here in addition to violins, violas, and lute.

Next, the Polnishche Sackpfeiffen ("Polish Bagpipes") sounds just as its title suggests, with a wonderfully earthy tenor to the proceedings.

Sonata amabilis a 4 ("Amiable Sonata") is just that, too, an amiable, affable, good-natured piece of music in a pastoral vein, the violin sweetly wafting in and out of the viola accompaniment. And so it goes, the selections alternating between bright and lively works and more serene, even courtly numbers.

The final piece, the Sonata in D "Battaglia," bears special mention in that it's the most obvious example of program music on the disc. It describes in musical terms a battlefield encounter, complete with a solemn introduction, full-on combat, and a final resolution. The battle rages until we hear only the military drum left standing. The work predates Beethoven's Wellington's Victory by nearly a century and a half.

Interestingly, too, a booklet note tells us that "a particular speciality of seventeenth-century Habsburg music was 'scordatura.' This term derived from the Italian 'scordare' means the 'mistuning' of one or more strings to a different note from the normal one. This practice makes it easier to play chords and alters the sound of the violin. Sometimes, as a special effect, a string was even mistuned in the course of a sonata." 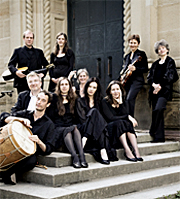 Anyway, the Freiburger BarockConsort are an accomplished set of musicians, but don't expect them to play with the elegance of an Academy of St. Martin in the Fields, Philharmonia Baroque, Academy of Ancient Music, or English Concert. The ten musicians of the Freiburger BarockConsort, members of the Freiburger Baroqueorchestra, play in quite a festive and exhilarating fashion (in the manner of Jordi Savall's Les Concert des Nations, for example), meaning they make up for any minor lack of refinement with the ultimate joy and enthusiasm of their music making. Enjoy the fun they're having.

Because the BarockConsort are only ten members strong, you would expect them to sound reasonably clear on disc, and you'd be correct. Recorded in Freiburg in 2010, the disc's sonic presentation spreads the players well across the sound stage, with each of the instruments lucidly delineated. Yet there is also a warm, resonant acoustic involved to provide a sense of realism to the occasion. A broad dynamic range, strong impact, good depth, quick transient attack, and a wide frequency response add icing to the cake.

Harmonia Mundi do up the package with attractive graphics; a well-written booklet insert in English, French, and German; and a light-cardboard slipcover for the jewel case.

Email ThisBlogThis!Share to TwitterShare to FacebookShare to Pinterest
Labels: Schmelzer