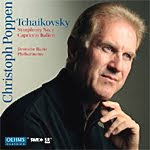 You don't hear Tchaikovsky's Symphony No. 1 "Winter Daydreams" too often. Come to think of it, you don't hear any of the composer's first three symphonies very much, at least not on disc. I suspect his final three symphonies so overshadow the first three, we get a whole lot more recordings of Nos. 4-6. In any case, Peter Tchaikovsky (1840-1893) began working on his First Symphony in 1866, premiered it in 1868, and then continued fussing with it for the next twenty-two years before it satisfied him.

Tchaikovsky subtitled the first movement "Dreams of a Winter Journey." This is probably the most quintessentially "Russian" sounding part of the work. It begins tranquilly enough and then apparently the journey gets progressively more difficult because the music gets more frenetic before subsiding into a relative calm. Although maestro Poppen attempts to make it a happier journey than Tchaikovsky likely intended, it comes off in good spirits.

One shouldn't take the subtitle of the second movement Adagio, "Land of Desolation, Land of Mists," too literally. Tchaikovsky probably meant the secondary title to represent a state of mind, the fellow himself being a rather depressed sort. Certainly, he wouldn't have referred to his own mother country as a land of desolation. Be that as it may, Poppen brings out most of the old Russian melody the composer used, though I missed some of the Russian soul (or Tchaikovsky anguish) in the music.

Tchaikovsky gave no subtitles for the Scherzo or Finale. Maybe by the time he finally completed the work, he didn't care anymore or thought subtitles immature. Whatever, Poppen plays up the Scherzo's similarities to the composer's later ballets and waltzes, and the movement never takes on a life of its own. Based on another Russian folk song, "Flowers Bloom," the Finale closes in traditional fashion, with big contrasting themes to bring it to a thunderous conclusion. Again, Poppen does his best yet never quite injects as much life into the music as I've heard from a few other conductors, like Haitink, Jansons, Leaper, Markevitch, Muti, Pletnev, and Rostropovich.

While Poppen's relatively matter-of-fact reading of the Symphony No. 1 didn't exactly create the reverie or excitement I'd hoped for, he does develop an adequate degree of animation and color in the Capriccio Italien (1890). A visit to Italy inspired Tchaikovsky to write the piece, and the music has been a fan favorite ever since. Under Poppen one can see why--it's invigorating, flavorful, spirited, and dynamic.

These recordings from Oehms Classics derive from live sessions in 2007 (Symphony) and 2009 (Capriccio), and they sound like it. The recordings are fairly close, presumably to minimize audience noise, but it doesn't entirely help. Any time there's a lull in the music, we hear people lightly coughing, wheezing, or shuffling their feet. Then, at the end of each work, there is an unfortunate outburst of applause to spoil the mood. Apart from that, the sonics are fine. Although there isn't a lot of stage depth involved, the stereo spread is certainly wide enough. Midrange is modestly clean and silky smooth, and impact is respectable, while bass and treble might have benefited from a greater extension. In short, these are warm, resonant, useful, if slightly prosaic, recordings.