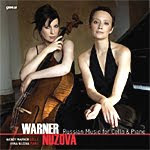 Fans of Cedille Records don't need me to tell them that three major elements characterize the company's products: (1) Music that performers don't often play in public and other companies don't often record but which otherwise can hold keen interest for listeners; (2) artists who are not always as well known to the public as musicians pushed by the bigger labels, musicians who are, nevertheless, of the highest calibre; and (3) sound quality of an excellence you wouldn't expect from a small, independent record company. This latest release, Russian Music for Cello & Piano, exemplifies everything that is good about Cedille.

The program begins with the Sonata No. 2 in A minor for Cello and Piano by Nikolai Miaskovsky (1881-1950), which Miaskovsky completed in 1949 and dedicated to Mstislav Rostropovich. It's a lovely, lyrical, slightly melancholy, endlessly gracious piece of music, its three movements creating a single beguiling effect. After that is the Étude No. 8 for Piano Solo (1894) by Alexander Scriabin (1872-1915), here in a transcription for piano and cello. It is also gentle and faintly melancholy, representative, no doubt, of the deeply moody Russian soul. The Musica Nostalgica for Cello and Piano (1992) by Alfred Schnittke (1934-1998) comes next, a brief piece that pays tribute to the eighteen-century minuet form in a kind of tongue-in-cheek manner. The little Adagio from the ballet Cinderella (1945) by Sergei Prokofiev (1891-1953) follows, a waltz transcription the composer made himself. Finally, the program ends with the Sonata in G Minor for Cello and Piano (1901) by Sergei Rachmaninov (1873-1943), the longest work on the disc, its four movements thoughtful, complex, and expansive as Rachmaninov can often be. The Andante is particularly appealing.

The performing duet of Wendy Warner on cello and Irina Nuzova on piano play as all good partnerships should, as one. In their case, it's almost as if one performer were playing both instruments, they are so attuned to one another's feeling and responses. The two women, who have been performing together as the WarnerNuzova cello and piano duo since 2008, play with style, with grace, with refinement, and with deep emotional attachment, yet always placing the music above any showmanship on their part. Most important, however, they appear to reach into the heart of this heart-wrenching music and convey its inner spirit with not only clarity and precision but with ultimate passion. They are consummate artists.

Cedille, under producer James Ginsburg and engineer Bill Maylone, recorded the album in October, 2008. As always with this company, the results are realistically natural, warmly detailed, and profoundly satisfying.