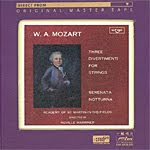 After listening to the first track on this disc, the Divertimento in D, K. 136, and picking my jaw up off the floor, I turned to the booklet note, where the XRCD's producer, Winston Ma, says "I consider the string tone and nuance of this recording the best from my entire collection, including all other labels." This is not just hyperbole. I found the disc perhaps the best recording of a small chamber orchestra I can ever remember hearing. Be forewarned, however: The recording is fairly close. If your speakers are at all forward or bright, you might not appreciate what you get. On my VMPS RM40's, the sound is delicious.

Of course, for any remastering like this one to sound good, the engineers have to start with good source material, and here is one of the ingredients of the present success. If you're old enough to remember the excitement Neville Marriner generated back in the Sixties and early Seventies with his Academy of St. Martin-in-the-Fields recordings of early music--done before the period-instruments crowd popularized their take on the subject--you'll feel some of that excitement again in this FIM recording. Marriner recorded the Divertimenti and the Serenata Notturna in 1968 and issued them on the Argo label, the home of so many fine recordings that still sound as good today as they did back then. Only in this case, they can sound even better.

Mozart filled his Divertimenti with a youthful exuberance, an exuberance appropriate to the composer's age when he wrote them, sixteen, although they are by no means immature works. They are light and airy, to be sure, scored entirely for strings, but they have immense gravitas, too. Besides, by Mozart's reckoning, a fellow who started writing music when he was in the womb, sixteen was practically middle age.

The Serenata Nocturna, written four years after the Divertimenti, adds a few march tempos to the proceedings and delights in using what is essentially a string quartet supported by a small string ensemble and muted tympani. The result is startlingly innovative and endlessly brilliant, with Marriner and the Academy playing it with all the spit and polish for which we know them.

FIM does up the recording in the 24-bit XRCD process developed by JVC, a technology so precise and so exacting it makes the formulas for string theory seem crude by comparison. Not that the source material doesn't sound good even in its regular CD release; it's just that this FIM remastering sounds that little bit better in terms of dynamics and transparency. Needless to say, however, you pay a heavy price for an XRCD and its elaborate packaging, a cost that would buy you a half dozen budget-priced CD's; but one listen to this disc through a good stereo system, and you'll see why the price may be worth it.