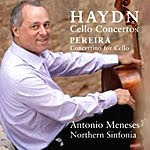 Franz Joseph Haydn (1732-1809) was one of those composers who could seemingly do no wrong. Even though we probably know him best today for his symphonies (he wrote 104 of them, after all), he succeeded in practically every other musical form as well, from chamber to vocal to concerto works. The two cello concertos we find here are good examples.

According to the booklet note, the Cello Concerto No. 1 (1761-1765?) only came to light in the 1960's. It is quite charming (which is a redundant statement, I know, in reference to Haydn), and cellist Antonio Meneses appears to take as much delight in it as his audience undoubtedly will. The Concerto No. 2 (1783) came to light in the 1950's, and as he did with its companion, Haydn wrote it in orthodox concerto style, with fast-slow-fast movements (allegro-adagio-allegro). The quick tempos are sprightly rather than tiring and together with the more-leisurely moments give Meneses plenty of room to demonstrate a range of emotions from sweet and light to seriously elegant.

In between the two Haydn concertos the disc offers the Concertino for Cello and String Orchestra by Brazilian composer Clovis Pereira (b. 1932). The composer says he based the piece on "common Brazilian elements," including "modal scales only found in the music of the Mata Zone of north-eastern Brazil," as well as "melodies sung by the north-eastern 'cowboys' to calm their herds." Thus, we get a modern yet old-fashioned sounding concerto to set off the traditional, classical Haydn works. I had never heard the Pereira concerto before but found the opening movement original, the second movement gently romantic, and the closing Rondo rather festive. The Pereira piece makes an agreeable complement to the Haydn.

Avie's sound, recorded in 2009, is slightly close, the better to obtain the last possible iota of detail from Mr. Meneses's cello and the relatively small Northern Sinfonia ensemble spread out around him (and which he also directs). Even though the acoustic is tight, we never find any harshness or brightness in the sound (unless one's own speakers cause it). Instead, we get a smooth, rich, sharply etched sound that properly brings out the nuances of the music and provides pleasant demo fare for audiophiles seeking good midrange material.