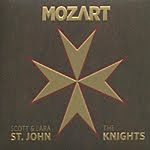 The Sinfonia Concertante, K. 364, from 1779 was the final string concerto Mozart wrote. Siblings Lara and Scott St. John pair up on violin and viola to perform it, with the chamber ensemble The Knights providing a lively support. Ancalogon's press release tells us that the Sinfonia "is rarely recorded in its original form, with the viola part in scordatura (with open strings tuned a semi-tone higher than standard tuning. Scott St. John takes up the viola to join his sister on the recording, making this the first time the Sinfonia Concertante has ever been recorded by siblings."  Well, close enough: David Oistrakh and his son Igor paired up for a 1963 Decca recording, so at least something like the idea isn't new. What's really new is the St. Johns' take on the music.

Yes, almost the first thing one notices about all three performances on this disc is their liveliness, helped by tempos that are quicker than one usually hears yet never rushed or hurried. Then, too, in the Sinfonia we get a wonderful interplay between the slightly dominant, higher-pitched violin and the more-resonant viola, an interplay that is always a delight. The playing by both soloists is of the utmost refinement and grace, even proceeding through the movements at as spirited a pace as they do. There is a lovely purity of tone everywhere enabling the two soloists continually to reinforce one another.

The St. Johns take their turns as soloists in the Violin Concertos Nos. 1 and 3 (1975), Scott St. John soloing on violin in No. 1 and Lara St. John soloing in No. 3. Just as important as the sprightly tempos, the smooth, fluid rhythms contribute to the playing's overall success. You'll find nary an awkward pause, a faulty interruption, or a questionable change-up in any of the readings. Everything flows in faultless lines from beginning to end, with a lighthearted, good-natured air about all of it. I found these among the most-pleasurable performances I've heard in months of some of the most-pleasurable music ever written. By comparison, the St. Johns make many other interpretaters of this music sound positively pedestrian.

Now, far be it from me to contribute to any sibling rivalry by daring to suggest a favorite here. So just let me assure you that both St. Johns play with virtuosic confidence and make their instruments sing most eloquently.

Ancalogaon sound engineer Martha de Francisco recorded the music in multichannel at the Academy of Arts and Letters, New York City, on April 2-4, 2010. The SACD plays back in 5.0 channels on suitable equipment and in 2.0 on a regular CD machine. In the two-channel stereo mode I listened to, the sound is very clear and clean, without being in any way bright or forward. There is an excellent focus and definition, with the solo parts relatively close but never in our laps, the accompaniment well laid out around and behind the soloists. While there might have been a little more depth involved for my taste, the left-to-right stereo spread is splendid. This is also an extremely well balanced recording, with a fine upper bass warmth that never interferes with midrange transparency.

One oddity, though: The album cover (pictured above) announces the composer and the players but not a word about what's on the disc. I'm not sure how good an idea that was.