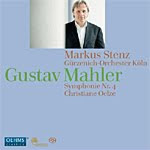 For the past forty years or so we've seen as many or more recordings of Austrian composer Gustav Mahler (1860-1911) than practically anyone else. Why the popularity, especially of his First and Fourth Symphonies? I don't know, but everybody has a guess. I'd say it's because Mahler's music is so accessible, so tuneful, yet so mature. Just as important, his music is big, the man composing for huge orchestras; and his music is varied, from grand, eloquent sections to quiet, intimate passages, from deadly serious to mischievously satiric. No doubt, too, a lot of folks have discovered that Mahler's music is one heck of a great way to show off a stereo system. In any case, Mahler is back, this time his Fourth Symphony (1900) with maestro Markus Stenz and the Gurzenich Orchestra Koln on a hybrid stereo/multichannel Oehms Classics Super Analogue Compact Disc.

Stenz shows us from the outset that we are going to be in for an interpretation of strong contrasts. The first movement, which Mahler marked as "gay, deliberate, and leisurely," begins with the jingling of sleigh bells, which the conductor takes very gently, very softly, very slowly, building quickly to a mild frenzy before letting it subside into relative calm. The music certainly justifies the change-ups in mood and tempo, and the result is the carefree cheerfulness I'm sure Mahler intended. Bruno Walter, the conductor who probably helped popularize Mahler more than anybody else, once wrote of the Fourth Symphony that the composer "assures himself and us of a sheltered security in the sublime and serene dream of a heavenly life." Stenz sees it mostly this way, too.

The second movement introduces Death into the scene, with a vaguely sinister violin motive. Stenz ensures that the character of the music is never actually threatening, however. It is more playful than most other interpretations and certainly not at all menacing.

Then comes the slow, third-movement Adagio, marked "peacefully," a kind of respite from the oddities of Mr. Death in the previous section. Stenz handles it as "peacefully" as I have ever heard it done, again demonstrating his unexaggerated tendency to contrasts.

All of this is build up, of course, to the fourth and final movement, Mahler's vision of heaven as exemplified in the simple innocence of an old Bavarian folk song, a part of the German folk-poem collection Das Knaben Wunderhorn that Mahler so favored. Indeed, Mahler wanted this movement to sound so unaffected he insisted upon the soprano's part being sung with "child-like bright expression, always without parody." This doesn't mean, though, that Stenz doesn't see some irony in the closing statement, especially when Mahler has it fading into silence. Does the silence symbolize the rapture and ecstasy of eternal heavenly bliss, or does it also suggest nothingness? A contradiction to the end.

In any case, the last movement is the only one that struck me as slightly out of character, the soprano, Christiane Oelze, seeming a little more sedate and mature than the naive innocent Mahler describes. Still, it's a quibble. This is a lovely rendering all the way around.

The sound, recorded in the Kolner Philharmonie in 2009, is beautifully smooth and detailed, with more than adequate stage depth in the two-channel stereo mode I experienced. Although dynamics are a trifle soft, on the few occasions when the orchestra produces a deep bass note, everything comes across most authoritatively. The more one listens, the more one recognizes how very natural this recording sounds, as though one were actually in the hall with the musicians. Everything about the disc seems to work in harmony with everything else.