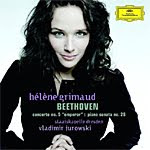 The booklet note describes pianist Helene Grimaud as "among the most sagacious of today's keyboard artists, a philosopher at the concert grand." It goes on to say that her interpretation of the Beethoven Fifth Piano Concerto is "a journey of the soul through the vales of worldly despair and over the peaks of ideologies. A musical journey to a world viewed from a melancholic interior--and a journey in time from Beethoven's world to ours." She herself says of the Concerto that it is a work of "philosophy cast in music, a philosophy that sets out to neutralize human contradictions."

Phew! That's a lot for any piece of music to mean and a lot for any musician to convey. Does Ms. Grimaud live up to the rather overwrought prose? Well, she certainly plays with dazzling virtuosity. She must have ten fingers on each hand. And there is no denying that her performance of the Concerto is thrilling in the extreme.

But I also admit to finding the interpretation a bit over-driven in parts, leaving one almost breathless at the end. Interesting, too, that a performer described as a "philosopher" would produce something that appears more grandiose than other pianists' readings. And it's not that her realization is any faster than other performances. It just seems that she sometimes pushes it harder than most others do, despite some lovely poetic moments, especially in the slow movement. Frankly, though, I much preferred her rendition of the accompanying Piano Sonata No. 28, where her natural lyricism holds sway.

Nor am I sure that DG did her any favors with the sound. The piano seems too clangy and thumpy, and the Dresden Staatskapelle appears too thin and bass shy alongside her. To be certain it wasn't just my ears that were faulty on the night I listened, I put on Arrau (Philips), Ashkenazy (London), Kovacevich (Philips), Perahia (Sony), and Kempff (DG) for comparison, and those recordings all sounded warmer, fuller, better balanced, and more realistic to my ears. Anyway, while Ms. Grimaud produces both an exhilarating, grandiloquent, yet often lyrical rendition of the "Emperor" Concerto, for my money it is maybe not a performance for the ages.