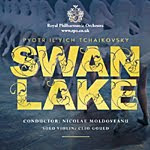 According to most authorities, in 1875 Petrovich Begiche, director of the Moscow Imperial Theaters, commissioned Peter Tchaikovsky (1840-93) to write the score for the ballet we now know as Swan Lake. Premiered in 1877, it was the first of the composer's big three ballets, with The Nutcracker and Sleeping Beauty following some years later. Today, we take for granted that Swan Lake is one of the greatest of all ballets, possibly THE greatest, but initially it was a flop. The dancers complained they couldn't dance to the music, the conductor couldn't properly handle the tunes, and critics generally panned it. It would not be until 1895, several years after the composer's death, that the ballet's popularity would begin to soar in a revival, and it is this revised score upon which the producers of the present CD set based their recording. In any case, it is good to have another performance of the complete ballet in so energetic an interpretation and in such robust sound.

The story behind Swan Lake purportedly began as a little ballet called The Lake of the Swans that Tchaikovsky wrote for his family in 1871. Then, when he received the commission, Tchaikovsky added Russian and German folk tales for his sources, the general plot based on a story by the German author Johann Karl August Musäus. One of the salient points about Tchaikovsky writing it is that critics now consider it the first ballet composed by a writer who had previously worked almost exclusively in the symphonic field. Thus, if Swan Lake sounds more "symphonic" in structure, composition, and themes than earlier ballets, there is a reason.

Swan Lake tells in four acts the story of a young man, Prince Siegfried, whose mother insists that it's about time he find a bride and marry. No sooner said than he chances upon a beautiful young woman, Odette, with whom he falls in love. However, as fate would have it, an evil magician has put her and her attendants under a spell whereby they may be human at night but turn into swans by day. Naturally, it is only a true and unfailing love that can save her. Ain't it always the way?

Romanian conductor Nicolae Moldoveanu is gentle and lyrical when necessary at times and just as melodramatic and histrionic as you'd expect at other times. Moldoveanu maintains zippy rhythms throughout, building a good deal of excitement while displaying a firm control of the ballet's poetic sequences, especially the waltzes. However, as delightful and impassioned as the maestro and his Royal Philharmonic players are, they never quite match the stylish polish of Andre Previn and the LSO (EMI) or the smooth refinement of Charles Dutoit and the Montreal Symphony in their complete and competing sets, or the outright glamour and class of Anatole Fistoulari and the Concertgebouw (Australian Decca) in their disc of highlights.

Interestingly, Dutoit is currently the Music Director of the Royal Philharmonic, so he probably handed off the conducting duties in Swan Lake to Moldoveanu because he had already recorded it and didn't feel the need to compete with himself. In any case, Moldoveanu's performance is strong, sturdy, and theatrical. If it loses a little something in the svelte or cultured departments compared to its competitors, it makes up for it in power and presence.

Recorded in 2009 at the RPO's home, Cadogan Hall, the sound is remarkably dynamic, with plenty of impact at every turn and a big bass drum that dominates many of the scenes. Indeed, it is the drum that may delight some audiophiles yet infuriate some music lovers (or vice versa). The drum adds to the overall realism of the recording but can also be a little distracting. Otherwise, we get a warm, ambient acoustic, a reasonably transparent midrange (with some glorious trumpets), a wide stereo spread, and a modestly extended stage depth.

This new Swan Lake makes a welcome addition to a small and exclusive group of recordings that fully illuminate the ballet's score.