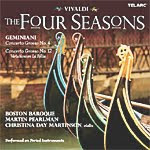 It's The Four Seasons. It's the Boston Baroque. What's not to like?

Well, the question is whether this particular Four Seasons is any better than the three or four or six or eighty-six versions of Vivaldi's perennial classic you've already got in your collection. The answer is, Probably not. It's very good, mind you, and it takes its place among the best available, but there are so many different interpretations with so many configurations of players and instruments, it's hard to recommend a definitive choice.

Nevertheless, Martin Pearlman and his Boston Baroque band are quite a lot of fun to listen to, colorful and spirited in every way; plus, they add some of their own ornamentation to several movements, which makes them a little different. What's more, Telarc engineers have captured a warm, full, wide acoustic for them, without the recording sounding in any way cavernous or tubby or foggy. There is decent clarity here, and a fine sense of presence to the music. Besides, there are two interesting fill-ups on the disc in the form of Francesco Geminiani's Concerto Grosso No. 4 and Concerto Grosso No. 12 ("Variations on La Follia") that are both quite absorbing. Maybe the disc isn't an absolute number-one choice in a Four Seasons, but it's worth a listen in any case.