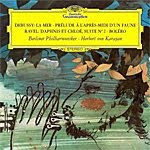 I have to admit I've never been the biggest fan of Herbert von Karajan, finding much of his music-making rather glossy, often creating gorgeous sound paintings at the expense of the music itself. This is somewhat at the opposite extreme of one of my favorite conductors, Otto Klemperer, who tended to emphasize the music so much that audiences sometimes lost sight of its beauty. Maybe you can't always win.

In any case, Karajan became one of the most prolific, celebrated, and popular conductors the world has ever known, and the two record companies with which he did his most-famous work, DG and EMI (from the 1940s until his death in 1989), are commemorating his one-hundredth anniversary with a series of reissues. This one, which includes works from Debussy and Ravel, are among the best recordings he ever did.

The highlight of the disc is Karajan's 1964 Berlin Philharmonic rendition of La Mer. It is splendidly resonant with atmosphere and color, all awash in Karajan's lushly extravagant orchestral style. The accompanying note suggests that since Karajan was an avid yachtsman, his love of the sea is reflected in this interpretation. I can't argue with that. There is no doubt the performance is powerful and evocative of the sea or that it is one of the finest readings of Debussy's score ever put to disc.

The other performances are no less inspiring, the impressionist feeling of Debussy's Prelude a l"apres-mide d'un faune and Ravel's Daphnes et Chloe Suite No. 2 coming through with passion and imagination. Yet it is Ravel's Bolero that really shines. I had actually not heard Karajan's version of it before (at least not for years and couldn't remember it), and it is quite astonishing. It's one of the few versions that didn't put me to sleep halfway through, the conductor maintaining a steady pace yet increasing the music's energy and vitality as he goes along without losing one's interest.

The sound is typical of DG in that it has a wide dynamic range, but it also seems to lose some sparkle at the high end, perhaps due to noise reduction. I doubt that anyone will object, as the audio is still quite nice, and it complements well the dreamy imagery of the music. The disc comes housed in a Digipak case that emulates in miniature the old LP jacket, with the disc looking like a miniature vinyl album.