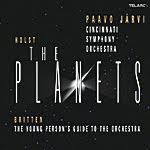 A lot of Holst's music seems raucous to me, but his masterpiece, The Planets, remains one of the mainstays of the classical catalogue for good reason. These little tone poems, based on both the planetary bodies and the Greek gods, show infinite variety and imagination. With endless opportunities for a bravura performance and showcase sound, it's no wonder so many conductors and record companies choose to put it on disc.

While Paavo Jarvi's reading of The Planets is perhaps not in the same league as Adrian Boult's performance (EMI) interpretively or Andre Previn's recording (EMI) sonically, it's serviceable and has the advantage of ultrasmooth sonics and the coupling of Britten's Young Person's Guide to the Orchestra. One could do worse.

Jarvi starts out well with "Mars, the Bringer of War," taking its somewhat goofy march at a fairly healthy clip, yet keeping in mind the martial energy it must convey. Jarvi builds up a good head of steam that should satisfy most listeners. The calm of "Venus, the Bringer of Peace" makes an apt contrast, and Jarvi manages the transition nicely. "Mercury, the Winged Messenger" and "Jupiter, the Bringer of Jollity" could have used a touch more humor, but they're OK. "Saturn, the Bringer of Old Age" has always struck me as being the downer in the set, and nothing Jarvi does or doesn't do can change that. "Uranus, the Magician" is without a doubt the real barnburner among the segments of The Planets, and for the longest time I've used Previn's recording (EMI-Toshiba) as a demo piece. Unfortunately, Jarvi tends to rush the movement, substituting speed for excitement or intrigue. "Neptune, the Mystic" concludes on an appropriately tranquil note, disappearing quietly into the ether as it should.

Benjamin Britten wrote his Young Person's Guide to the Orchestra for a 1946 educational film that illustrated the sounds of various instruments in a symphony orchestra. Although Britten's own Decca recording has always been a personal favorite, Jarvi's makes a fine second choice. The conductor gives every instrument its proper due as well as making the Henry Purcell music on which it's based sound fresh and new.

As to the sonics, Telarc recorded the Holst in 2008 and the Britten in 2006, using essentially the same recording equipment, the same recording venue, and the same recording engineer, Michael Bishop. Yet they sound different. The Holst needs more bottom-end oomph, a more prominent bass than it gets here. The Britten, however, does have the needed bass; in fact, it reminds one of the kind of bass punch for which Telarc has always been famous. Both recordings maintain Telarc's well-known fullness and smoothness, although the Holst tends to get a little more congested than the Britten in its loudest passages. One can notice this most obviously in the first movement of the Holst. Otherwise, the sound of both works is quite easy on the ear, if a little less transparent than it could be.

Email ThisBlogThis!Share to TwitterShare to FacebookShare to Pinterest
Labels: Holst