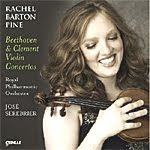 In the accompanying booklet note, violinist Rachel Barton Pine thanks various people for making this recording possible, but she forgets the one person who may have contributed most to its success: Cedille recording engineer Bill Maylone. Although these are lovely interpretations prepared with utmost care, it is the recording quality that sets the performances apart from the competition (in the Beethoven, anyway). The sound is warm, ambient, spacious, yet wonderfully detailed, with a wide stereo spread, a realistically balanced soloist, and about as good a sense of orchestral depth as I've heard in a while. Thank you, Mr. Maylone.

Here's the thing: Everybody knows the Beethoven Violin Concerto, but who's this Clement guy? Well, it turns out that when Beethoven wrote his Concerto in 1806, it was probably Clement who inspired him. Clement had premiered his own Concerto in 1805, with Beethoven in attendance. When Beethoven premiered his violin concerto a year later, he inscribed it to Clement and even asked Clement to perform the inaugural reading. The funny thing is, according to the booklet note, some critics at the time compared Beethoven's Concerto unfavorably to Clement's of the year before, saying that in Beethoven's work "the continuity often seems to be completely disrupted, and the endless repetitions of a few commonplace passages could easily lead to weariness." The Beethoven Concerto went on to become one of the mainstays of the classical repertoire, and the Clement Concerto died in obscurity. Again, the note explains that it hasn't been played publicly in two hundred years, and this Cedille disc represents its first recording!

The similarities between the Clement and the Beethoven Concertos are striking, besides their both being in D Major. Both begin with long, massive opening movements, which are nevertheless filled with affection and geniality, in which the soloist doesn't enter until after a lengthy introductory passage; the slow middle movements are serene and contemplative; and both works close with Rondos of high-spirited charm.

Ms. Pine plays both pieces with an expressive glow, never showboating with pyrotechnical wizardly but rather taking a leisurely approach in all but the final movements. So, you won't find as much excitement here as with a number of other violinists, but you will discover some other sublime pleasures, interpretively and sonically. The two-disc set is a delight.