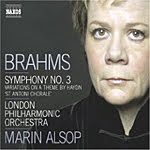 Marin Alsop continues her Brahms symphony cycle, releasing them in order, this Third Symphony coupled with the Variations on a Theme by Haydn. Although the Symphony has something to recommend it, I rather enjoyed the Variations more.

Again Naxos designate this an important disc by providing the jewel box with its own slipcover. But as a friend pointed out to me recently, it is part of the upscale image Naxos is trying to project. Ms. Alsop is a top-notch conductor, the London Philharmonic is among the world's great ensembles, and the repertoire is as mainstream as you can find. For this, you also get a price that inches upward from the budget category toward the mid-price range.

Anyway, what we have in Alsop's Brahms Third is another pleasant but not spectacular performance. In most respects, it's a rather conventional approach, which I found, frankly, a tad sluggish compared to my favored conductors--Klemperer (EMI), Boult (EMI), and Abbado (DG). Alsop's interpretation favors the slow inner movements, with the Andante and Allegretto coming off smoothly and poetically but the outer movements lacking the grandeur of Klemperer or the mellowness of Boult.

Certainly, one wants a degree of contemplation and reserve in the Third, and if that was Alsop's priority, she managed it well. Critics generally consider the Third Symphony Brahms's most intimate, and it's easy for it to come out sounding a bit stuffy if the conductor does not apply enough feeling of personal satisfaction. For me, Alsop's interpretation lacks passion in the opening section and conviction in the finale. It is, as I say, only in the pastoral inner segments that I found her calm reassuring.

The Naxos sound is also a bit of a snag. Like the other releases in this series, it is big and warm, plush and cushy. The problem is that if one puts on the Klemperer or Boult discs for comparison, one hears in an instant the greater transparency in those older recordings. Then when you consider that EMI have made all four Klemperer recordings available in a two-disc, mid-price set, the competition narrows considerably.