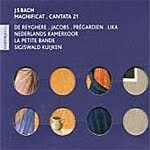 This 1988 Virgin Classics mid-price reissue is one of the most-lively Bach choral interpretations and one of the finest-sounding choral recordings of any Bach music I can remember.
It goes without saying that Sigiswald Kuijken and his La Petite Bande are going to provide as authentic and zesty a performance as one could wish for, but combined with Virgin/EMI's clear, natural sonics, the combination is irresistible. Like Martin Pearlman in a more-recent Telarc period-instruments reading with the Boston Baroque Orchestra, Kuijken chooses to play Bach's revised Magnificat in D-major rather than the earlier one in E-flat (or any of the other revisions Bach apparently made along the way). Many other period conductors prefer the original as somehow being more authentic, but it was Bach himself who revised the piece about ten years after its première, supposedly in order to remove some Christmas hymns that tended to limit its value year round and to lower the key to make it more comfortable for several of the instruments. In any case, both Kuijken and Pearlman with their respective soloists and choirs play it as well as any Magnificats I've heard, thanks to the refined liveliness of both sets of performers.
Where Kuijken and his La Petite Bande have the advantage, though, is the sound. The Telarc is fine, but it doesn't seem as though it has much depth. The engineers made it for multichannel playback, and in two-channel stereo that tended to rob of it some stage dimension. The Telarc also sounds, by comparison to the Virgin release, a bit more clouded, the Virgin more transparent. This is not to take anything away from the Telarc, which is still quite good; it's just that the Virgin recording is better. Yet the Virgin recording never sounds bright or shrill or edgy. It appears perfectly realistic from beginning to end.
The Virgin coupling, Bach's Cantata BMV 21, also comes across well and deserves a place alongside the more-famous Magnificat. It's just that works with descriptive titles tend to stand out in the public's mind more than numbered cantatas. This is a splendid offering in every way.
JJP
Posted by John J. Puccio