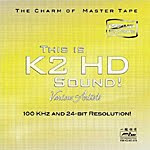 In the last sixty years, recorded sound for home use has gone through any number of changes, from the extended-frequency-range, long-playing albums of the late 1940s to stereo in the 50s to noise reduction in the 60s to quadraphonics in the 70s to digital CDs in the 80s to today's multichannel SACDs and their like. Of course, not everyone sees these changes as improvements, just as not everyone hears any difference in HD or XRCD processing and regular disc technology. But, I tell you, if anyone is going to be on the cutting edge of high fidelity, it's going to be our old friend Winston Ma and his First Impression Music company. Maybe that's why after giving us Super Coding and XRCD masterings, he's now into K2 High-Definition coding.

What's K2HD coding? Winston spends the first three pages of his booklet note explaining it, and I still didn't know what it is exactly, except that it promises to pack "the information of 192kHz and 24bit in CD master format of 44.1kHz and 16bit." I think that means it's supposed to get the complete sound of a master tape onto a regular compact disc. But the believing comes in the hearing, so until I listened I had my doubts. After listening, I had no doubts. This sampler disc really does convey the impression of wide dynamics, clarity, and impact associated with my own experiences listening to professional master tapes in the home. (Not my home, by the way; the home of an acquaintance some years ago who recorded professionally.)

"This Is K2 HD Sound!" contains sixteen tracks that producer Winston Ma selected from the master tapes in his collection, most of which he has previously released, transferred to disc using other technologies. Here, they sound better than ever. Let me highlight just a few of the selections I admired.

Things begin with the Dance No. 1 from Rachmaninoff's Symphonic Dances, Eiji Oue conducting the Minnesota Orchestra in a 2001 Keith Johnson/Tam Henderson Reference Recording. It displays a tremendous dynamic range, a resounding bass, glistening highs, and a sharpness of detail in the midrange that is indicative of the whole K2 process. The recording has the kind of transient oomph most of us remember from moving-coil cartridges of long ago, but, more important, it is far smoother and more natural. It's an impressive start to the album.

Another track I enjoyed (well, OK, I enjoyed them all, but in particular) was "Stardust," another Johnson/Henderson collaboration, this one recorded in 2006 at Fantasy Studios in Berkeley. In it you'll find the sound of a rock-solid bass fiddle and some of the purest accompaniment around.

Next, Wei Li, master of the guzheng, plays "Amazing Grace." The guzheng is a kind of Chinese zither, a string instrument that one plucks, and being plucked and recorded at Skywalker Sound in 2006, it probably never sounded better.

From the 1972 album "Esther" comes "Kinderpiele," the recording embracing a breathtakingly beautiful female voice with guitar accompaniment. The vocalist sings it in German, and even though I don't understand German and hadn't a clue what she was singing about, the song moved me close to tears.

From Winston's "Grooving Classics" comes the "Habanera Fantasia" from Carmen, with Harold Farberman conducting, a piece I have always enjoyed; but it's upstaged by the very last cut, also with Farberman, of the Pachelbel Canon from a 1982 Vanguard Recording of percussion pieces. To say that it is exquisitely precise in its detailing would be understatement. Isn't this the way all music should sound on record?