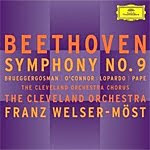 I've always liked maestro Franz Welser-Most. He made a big splash on EMI records some years ago and then sort of disappeared from the scene. It's good to see him as the Music Director of the Cleveland Orchestra and hear another of his recordings, this time on DG.
Welser-Most's performance of the Beethoven Ninth Symphony is, like much of the conductor's work, sensitive and moving. He takes most of the tempos at extremes, either fast or slow, which may infuriate some listeners and delight others. Certainly, there is nothing routine about the interpretation. The third-movement Adagio is especially gracious and lovely, and the choral finale generates about as much excitement as any you'll hear on disc.
The snag is the recording. DG did it live, which for me is often the kiss of death. Although it is smooth in the midrange and strongly dynamic in its impact, the highs are more than a bit bright, the upper bass is woolly, the deep bass is wanting, and the whole affair sounds shrouded and veiled. Compare Solti (Decca), Zinman (Arte Nova), or Bohm (DG). To ensure that the mood is broken at the end, DG include an eruption of applause for Welser-Most, which always reminds me of producers using laugh tracks on television comedies. Moreover, DG provide the album with one of the most god-awful covers I've seen in ages: large, alternating light and dark purple squares with the words "Beethoven Symphony No. 9" and other details spelled out in orange letters. Purple and orange. Just the ticket for Beethoven.
JJP
Posted by John J. Puccio