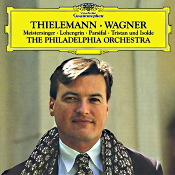 Good heavens, yet more bleeding chunks of Wagner? Well, not exactly. With one exception, it is the usual collection of Preludes and such that Wagner intended as purely instrumental music in the first place; the exception being the "Good Friday Music," shorn of its vocal accompaniment. The conductor is Christian Thielemann, Karajan's young assistant in the 1980s. He appears to have learned well from the master and presents an agreeable selection of Wagner items.

The program starts off with the First Act Prelude to Die Meistersinger, which I admit I found somewhat lugubrious. But by the time the third item rolls around, the Act Three Prelude to Lohengrin, the conductor has picked up a head of steam and is showing more dash and élan.

The disc gets even better as it goes along. The Act One Prelude to Parsifal has breadth and dignity, and the "Good Friday Music" is genuinely moving. Of course, the real test of any Wagner's conductor's mettle is in his handling of Tristan and Isolde, perhaps the most romantic-erotic music of all time. Here Thielemann adds some nice touches in dynamic gradation that add a sense of nobility to the works; yet alongside his mentor's recordings (DG) or those of one of my favorites, Otto Klemperer's (EMI), his interpretations seem a bit pedestrian and lacking in ultimate passion.

This was the first time (1998) I had heard the Philadelphia Orchestra recorded by DG, and I had to ask, where was the famous "Philadelphia Sound"? Apparently, it was homogenized out of existence by the DG engineers. The sonics are big, warm, and heavy, with a slightly gritty texture and a much too-close and tubby bass drum. By comparison, the recording by Bernard Haitink and the Concertgebouw Orchestra (Philips) in much the same repertoire has better definition and better depth; and, what's more, the drums are in the right place.

In all, despite my reservations, this album is really pretty good. But there are always alternatives, and Thielemann would not be my first choice in this material.