Oh joy. Yet another live recording. 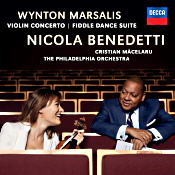 Begin rant:
It's a sad state of affairs in the classical record business when good studio recordings of orchestral music have all but disappeared. The prohibitive costs of paying an orchestra, paying technicians, and paying for the venue have become too expensive most of the time for even the biggest recording companies and most prestigious orchestras to record without an audience to help subsidize the costs. Add to that issue the fact that pirating has become so rampant in the music industry, it's hard for anyone to make a profit anymore.

Well, we have what we have, and about all some of us who still prize good sound can do about it is complain, hope for the best, and thank our lucky stars there are still a few record companies making a few good studio recordings, usually with middle-European or lesser-known orchestras.
End rant.

Anyway, most people probably recognize Wynton Marsalis as a virtuoso jazz and classical trumpeter, but he is also a teacher, musical director, cofounder of Jazz at Lincoln Center, and composer, one of his compositions being the first to win a Pulitzer Prize for Music (the oratorio Blood in the Fields). On the present album you can hear his Violin Concerto in D, which he wrote for Scottish violinist Nicola Benedetti, who plays it on the recording, accompanied by no less than the Philadelphia Orchestra and conductor Cristian Macelaru.

According to a booklet note, while the Violin Concerto is "scored for symphony orchestra, with tremendous respect for the demands of the instrument, it is nonetheless written from the perspective of a jazz musician and New Orleans bluesman." That much is evident in the first few minutes, in which Marsalis pays more than a little tribute to George Gershwin.

Marsalis describes the first movement Rhapsody as "a complex dream that becomes a nightmare, progresses into peacefulness and dissolves into ancestral memory." It does seem to be all over the place, never quite congealing into a satisfying whole, but Ms. Benedetti does her best to keep up and has the whole thing moving at a respectable gait. I'm not sure the music required the services of the Philadelphia Orchestra to accompany it, though. They sound fine, of course, but the piece is really a showcase for the solo violin.

The second-movement Rondo Burlesque is, according to Marsalis, "a syncopated New Orleans jazz, calliope, circus clown, African gumbo, Mardi Gras party in odd meters." This scherzo is quick-tempoed and not a little goofy, with everything but the kitchen sink pounding away. However, it does provide Ms. Benedetti a chance to show off her virtuoso skills on the violin. It reminded me of the devil wildly playing the fiddle at a barn dance in "The Devil and Daniel Webster," which is actually a compliment to the music.

The third, slow movement, titled Blues, is by far the best part of the score, a "progression of flirtation, courtship, intimacy, sermonizing, final loss and abject loneliness that is out there to claim us all." Maybe it's because it's the first time the music slows down and invites to enjoy its beauty that I enjoyed it so much.

The final movement, Hootenanny, Marsalis describes as "a raucous, stomping and whimsical barnyard throw-down." Marsalis's description says it all. The music is quite cinematic and, and one can easily picture the scene in one's mind. Ms. Benedetti and the orchestra play it with gusto, and their enthusiasm carries the day.

I can't say that Mr. Marsalis's Violin Concerto will ever become a classic. It's quite accessible, to be sure, and much of it is no doubt fun. But it seems more than a little superficial as well, with its descriptive elements all too obvious and sometimes commonplace. While it goes down easily, thanks in large measure to Ms. Benedetti's playing, I doubt I'll be returning to it very often.

Accompanying the Concerto is Marsalis's Fiddle Dance Suite for Solo Violin, another rollicking yet reflective affair he wrote for Ms. Benedetti. Marsalis gives the five movements the titles "Sidestep Reel," "As the Wind Goes," "Jones's Jig," "Nicola's Strathspey," and "Bye Bye Breakdown." No, I didn't know what a "strathspey" was either, so I looked it up. It's a slow Scottish dance, a nod to Ms. Benedetti's Scottish heritage. As in the Concerto, the violin playing in Fiddle Dance will no doubt please Ms. Benedetti's fans. It encompasses quite a range of emotions and requires quite an accomplished player to pull off.

The sound in the Concerto has a kind of in-your-face closeness to it, common to many live recordings, with little depth to the orchestra behind the soloist. So it's all a bit flat and one-dimensional. The upper bass displays a pleasant warmth, but none of the sound appears to reflect much hall ambience. Clarity is good, as is the treble extension--not too bright but shimmering nonetheless. Dynamics, too, are reasonably good though not too impactful. Audience applause intrudes after the Concerto's final notes.

The sound of the solo violin in the Fiddle Dance I found more realistically recorded, a little more distanced and natural in tone. It did not appear that Decca recorded it live.

Email ThisBlogThis!Share to TwitterShare to FacebookShare to Pinterest
Labels: Marsalis