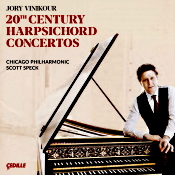 You'd have thought that so relatively antique an instrument as the harpsichord, deriving as it does from various designs dating back as far as the Middle Ages, would have relatively few new compositions written for it. But, in fact, as its popularity died out in the late-eighteenth and early nineteenth centuries in favor of the newfangled piano, it made a comeback of sorts in the twentieth century. In part this was due to a renewed interest in historically informed performances, but it was also due to a resurgence in new music written for the harpsichord. That's what this album is all about: Four modern concertos designed specifically for the harpsichord and played by harpsichord specialist Jory Vinikour.

Thus, the program presents four harpsichord pieces by twentieth-century composers. The first is the Concertino for Harpsichord and Strings by English composer Walter Leigh (1905-1942). He wrote the little work in 1934, and it is concise, melodic, and poetic. Vinikour plays a mean harpsichord, so there is nothing pretentious or hoity-toity here; the guy could probably play a rock concert on his harpsichord. Moreover, Maestro Scott Speck and the dozen or so Chicago Philharmonic Chamber Players who accompany Vinikour do so in exemplary fashion, never overwhelming the soloist, never leaving him behind or forgotten, either. The music is well presented in vigorous style.

Next is the Concertino de Camera by Pulitzer Prize-winning American composer Ned Rorem (b. 1923). He wrote it in 1946, although it didn't see a première until 1993. Vinikour's present recording is its debut on record. The work is cheerful, melancholy, and vivacious by turns and always tuneful. I suspect this is because of Vinikour's enthusiasm as much as it is the music. Vinikour attacks it with energy and élan. Yes, it does appear a little more "modern" than the Leigh piece that precedes it, yet it is always accessible and charming. I especially liked the delicate ornamental work of the middle, slow movement and the sensitive ensemble work of the half dozen or so accompanists.

After that is the Concerto for Harpsichord and Strings, Op. 42 by Czech composer Victor Kalabis (1923-2006). He wrote it in 1974-75, and Vinikour says "...it is difficult to imagine a work, distinctly a product of the 20th-century though it is, fitting the harpsichord so perfectly." I can't imagine the piece being played any better than Vinikour handles it, particularly the soulfully pensive Andante.

The final selection on the disc is the Concerto for Amplified Harpsichord and Strings by the English composer, pianist, and musicologist Michael Nyman (b. 1944). He wrote his concerto in 1994-95, and like much of Nyman's work, it is a minimalist creation. Yet, as Vinikour says, it "is thrilling both for performer and audience!" I have to admit that being a rather old-fashioned kind of fellow, I probably can't enjoy Nyman as much as many other listeners might. It gets a little raucous for my taste, but there's no denying the appeal of its driving rhythms and often exciting tango-like interludes.

Additionally, there is an excellent, twenty-page booklet insert that one should not ignore. It contains extensive notes by the soloist on each of the selections as well as information on the performers and production crew.

Producer James Ginsburg and engineer Bill Maylone recorded the concertos at Wentz Hall, Naperville, Illinois in November 2016; at the Feinberg Theater, Spertus Institute, Chicago, Illinois in March 2018; and at the Reva and David Logan Center for the Arts, University of Chicago (Rorem) in May 2018.

As always from this team, the sound is quite natural, like sitting in the seventh or eighth row at a concert hall. There is plenty of bass warmth and a minimum but realistic ambient hall bloom. It is perhaps a tad closer than usual from them, but it captures the sound of the harpsichord most vividly. What's more, the dynamic range and frequency response are up to the task of reproducing the concertos in lifelike fashion.