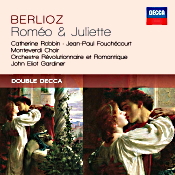 It was just year earlier, in 1997, that Philips released Sir Colin Davis's remake of Hector Berlioz's Romeo and Juliet with the Vienna Philharmonic; then, in 1998 Philips almost competed with itself with this set by John Eliot Gardiner. Fortunately, it really wasn't a competition since Gardiner conducts a period-instrument band and Davis does not. Plus, the newer Gardiner recording has the added feature of the listener being able to program it three different ways: In the standard performing version, presumably Berlioz's last word on the subject; in Berlioz's original version of it from 1839; and in Gardiner's own preferred version.

No, I didn't try all three arrangements. For comparison purposes I stuck to the standard version that Colin Davis followed because it was the best known to me. Nevertheless, the original version includes some attractive material the composer decided to omit, while, of course, leaving out a few items that he later added. I listened to the optional material independently of the rest of the work; not fair, I know, but the best I could do. I thought at the time it would be fascinating to hear the other arrangements in their entirety when I had more time. Well, as of this writing some twenty years on, I still haven't found the time.

As to the performances themselves, Gardiner's and Davis's, Gardiner's is the more dynamic. In general, it is a little swifter in its tempos and seemingly, smaller, overall, in scope. What's more, by a slight margin Gardiner's 1995 Philips recording, made in the Colosseum, Watford, England and now released on Decca, seems more clearly recorded than Davis's. As expected, though, under Davis the VPO, being a larger ensemble and playing modern instruments, present a bigger, weightier picture; and Davis's direction, a bit broader and more lyrical than Gardiner's, complements the image nicely.

I am not sure which set I prefer over the other. I certainly enjoyed them both. If I had to live with just one, however, I would go with the more familiar Davis. The music seems to flow more naturally in his hands, and the nuances are not quite so forced. Tough choices, though.