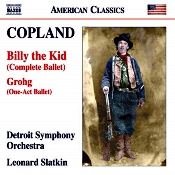 Was there ever another composer who so captured the American spirit as Aaron Copland (1900-1990)? His fellow composers referred to him as "the Dean of American composers," his having written such classics as Appalachian Spring, Rodeo, The Red Pony, Fanfare for the Common Man, Of Mice and Men, Our Town, and Billy the Kid. And what conductor has done more to advance the cause of musical Americana than Leonard Slatkin? Leonard Bernstein perhaps? Michael Tilson Thomas, Eugene Ormandy, Erich Kunzel? I dunno. In any case, before this recording with his Detroit Symphony, Slatkin had already recorded Billy the Kid at least twice, the previous releases being with the BBC Symphony Orchestra (BBC Music) and the St. Louis Symphony Orchestra (EMI, Musical Heritage Society, and Warner Classics). This time, however, he does the work complete.

Copland wrote Billy the Kid in 1938 on commission from Lincoln Kirstein, a noted New York impresario and cofounder of the New York City Ballet. The music became an instant success, incorporating as it does several well-known folk and Western tunes and telling an episodic story more about the Wild West in general than specifically about the notorious outlaw William H. Bonney (born Henry McCartney).

This work was the first in Copland's newfound "Americanized" style, and Slatkin takes advantage of it. There's a jaunty Western rhythm to the music, yet it's never a simple forward beat. The conductor is able to wring empathy, tenderness, and excitement from the piece, all the while making it seem almost cinematic, like a John Ford picture. Although I have to admit a slight preference for the composer's own late-Sixties recording with the London Symphony (Sony), the composer stuck with the suite rather than the full ballet. So this rendering with Slatkin may be among the best complete scores you'll find. And it's good to find it at so reasonable a price, too.

In addition to the complete Billy the Kid ballet is what may be for many listeners, perhaps, an oddity, the one-act Copland ballet from 1925 called Grohg. No, I hadn't heard of it before, either. The composer was inspired to write it after seeing German director F.W. Murnau's 1922 silent expressionist film Nosferatu, a retelling of the Dracula story. Although the tale is morbid, even gruesome, Copland said he meant his music to be "fantastic rather than ghastly."

The work may be short, less than thirty minutes, but it's colorful, a little jazzy, and certainly bizarre. Slatkin takes advantage of all of these characteristics, making it a rather fun piece of music and unaccountably overlooked by most other conductors. While it's no underrated masterpiece by any means, it does come off under Slatkin as something like a good film score. I wonder if anyone has ever thought of trying to incorporate it with the silent Murnau flick? Probably. In any event, Slatkin does make it come alive (pun intended) for the listener, and one can easily imagine the action of the story as it unfolds and feel the atmosphere of the scenes.

Producer Blanton Alspaugh and engineers Matthew Pons and Mark Donahue recorded the music at Orchestra Hall, Detroit, in October and November 2014. It's a pleasure listening to a recording not made live with an audience present. The perspective here is natural, not close-up, the frequency and dynamic responses are wide (the shot that kills Billy may jolt you from your seat), and the sense of hall presence in a fairly ambient bloom is pleasing to the ear. There could have been, I suppose, a bit more warmth in the upper bass to enhance the realism even further, but the overall clarity is, nevertheless, quite welcome.