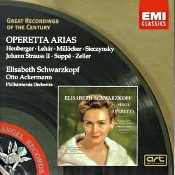 If you are like me, one of the joys of owning a large record collection is rediscovering something you haven't played in years. A friend of mine reminded me of this disc when he played a few excerpts from his own copy on the eve of his departure for Sri Lanka. He was heading off for two years in the Peace Corp, his idea of retirement, and since he could only bring a few CDs along with him, he was trying to decide which couple of dozen to take. Ms. Schwarzkopf headed his list.

The recording, from 1957 (released in 1959), remains one of the finest things the German-born Austro-British soprano Elisabeth Schwarzkopf (1915-2006) ever did, and she recorded a mountain of marvelous discs. She and her record-producer husband, Walter Legge, were meticulous about every detail of a song and a recording. Here, it shows.

It is a testament to their work that this is one of the oldest EMI recordings still selling briskly almost everywhere and in various different formats. Ms. Schwarzkopf excelled at opera, light opera, operetta, and lieder, and she and Legge would practice for hours on a single passage or the phrasing of a single note. Again, it shows.

Excerpts from Benatzky-Strauss's Casanova, Suppe's Boccaccio, Lehar's Der Graf von Luxemburg and Giuditta, and others have never come across more perfectly. The complete listing is as follows:

What's more, EMI's sound is above reproach even after all these years, especially as remastered here in 1999 as part of EMI's "Great Recordings of the Century" series. It is perhaps a little rough around the edges by today's standards, but it is better than most of today's digital recordings in its sense of naturalness and its emphasis on the beauty of the human voice. Indeed, one hardly notices the orchestral accompaniment, the voice is so aesthetically dominant, which is as it should be.

This is a disc of sweetness and refinement and great joy.