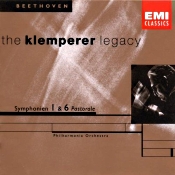 When Klemperer's producer, Walter Legge, asked if he didn't think Klemperer took his recording of the Beethoven Sixth Symphony's scherzo a little too slowly, Klemperer replied, "Walter, you will get used to it." Well, we've had over sixty years to get used to it, and I suspect it has by now pretty much grown on us.

Klemperer's performance of the Sixth continues to be one of the most relaxed, leisurely, bucolic interpretations ever put to disc. It has not and will not find favor among the Toscanini crowd, but it has delighted most everyone else since EMI recorded it in 1957.

The conductor takes the first movement, "The Arrival in the Country," very deliberately, very purposefully, its repetitions made weightier through its unhurried pace, yet never dragging, never feeling lugubrious. The second movement, "The Scene at the Brook," flows naturally and smoothly, maintaining the easygoing nature of the setting. Then comes Klemperer's famous third movement, usually a quick and boisterous Allegro representing peasant merrymaking, but here taken as though the peasants were more than tipsy when the scherzo started. The storm that follows is weightily structured in big, bold outlines, flowing effortlessly into one of the most joyous "Shepherd's Hymn" in any Sixth interpretation around. This is no namby-pamby performance, but one with a clear and assertive vision of pastoral life.

For what it's worth, by the way, I consider it pretty much a toss-up among four classic recordings of the Sixth as to which is my favorite: Karl Bohm and the Vienna Philharmonic (DG); Fritz Reiner and the Chicago Symphony (JVC, HDTT, or RCA); Bruno Walter and the Columbia Symphony Orchestra (Sony, and especially Sony Japan's Blu-Spec CD); and this Klemperer release on EMI. Any time I play any one of them, that one goes to the top of my list, so there's no clear winner for me.

My past reservations about the recording (made by producer Walter Legge and engineer Douglas Larter in Kingsway Hall, London) were in regard to the sound of the original LP and the recording's previous CD embodiment, which tended to be somewhat thin, harsh, and noisy. By comparison, this 1998 20-bit remastering, a part of EMI's "Klemperer Legacy" series, is smoother, fuller, and quieter. Nonetheless, the remastering retains a good deal of clarity, sounding more transparent than a lot of new releases.

The disc's coupling, Klemperer's recording of the Beethoven First Symphony, seems not nearly so characterful as his Sixth, sounding a little too massive to convey all of the work's good cheer. Nevertheless, it also seems more richly recorded than the Sixth. Go figure.

Of final note: EMI later reissued the same mastering of the Sixth as here in their "Great Performances of the Century" series, albeit with several Beethoven overtures as couplings instead of the First Symphony. You'll find that review here: https://classicalcandor.blogspot.com/search?q=beethoven+symphony+no.+6+klemperer