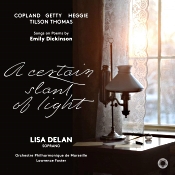 American poet Emily Elizabeth Dickinson (1830-1886) was among the country's most unusual artists in that she was almost unknown as a poet in her lifetime. She was withdrawn and reclusive, never married, and allowed the publication of only a handful of her poems while she was alive. After her death, her relatives found a veritable treasure trove of her poems and published many of them. Then, she became quite famous, yet, remarkably, her complete and largely unedited works would not see publication until 1955.

Although Ms. Dickinson's poems are most often brief and simple, they contain a wealth of insight. Conciseness is probably the single most important element in her poems, her succinctness in expressing big ideas in a small space. She had the unique ability to condense her observations on Nature, spirituality, consciousness, death, solitude, and essential human emotions like fear, longing, and ambition into just a few lines.

It was, perhaps, the breadth of Ms. Dickinson's insights that led a number of composers to set at least some of her poems to music. On the present album we find the work of four such composers, Copland, Heggie, Getty, and Tilson Thomas, effectively sung by soprano Lisa Delan, accompanied by conductor Lawrence Foster and the Marseille Philharmonic Orchestra.

Here's a rundown of the album's contents:

Aaron Copland:
1. Nature, the gentlest mother
2. There came a wind like a bugle
3. The world feels dusty
4. Heart, we will forget him
5. Dear March, come in!
6. Sleep is supposed to be
7. Going to Heaven!
8. The Chariot

Gordon Getty:
14. Safe in Their Alabaster Chambers
15. A Bird Came Down the Walk
16. There's a Certain Slant of Light
17. Because I Could Not Stop for Death

Soprano Lisa Delan provides a lovely presentation of the poems, her voice radiant and expressive. Maestro Foster's accompaniment with the Marseille Orchestra is sweet and sympathetic. One cannot doubt that the album's selections get a treatment the composers would approve.

That said, I don't know that I appreciated the music as much as I might. Having practically grown up with the poetry of Ms. Dickinson (well, since my teens, at least, in the 1950's), I not sure her poems need the added distinction of music. Would the words of Shakespeare be any better sung? Besides, poetry needs time for reflection, often line by line, maybe word by word, and by turning Ms. Dickinson's poems into songs, we don't get that meditative opportunity (unless you're going to hit the pause button every few seconds).

But I quibble. Of the song-poems presented, I preferred the ones set to music by Aaron Copland. They seemed the most musical and most evocative to me, perhaps because Copland was so used to staging ballet. By contrast, Jake Heggie's arrangements seem more energetic, with more pronounced, more dramatic accompaniments. Gordon Getty's take on some of the poems appears lighter than the others, but certainly appropriate--maybe the most appropriate of all considering the simplicity of the poems. However, he offers up the title poem, "There's a Certain Slant of Light," with a gravity, a seriousness, it deserves. The program ends with five poems by conductor-composer Michael Tilson Thomas, who affords them the most creative, most theatrical frameworks, with a hint of Leonard Bernstein thrown in.

Certainly, there is variety here, with everyone doing his and her part in the proceedings with evident care. I just wish, as I said, I could have enjoyed the music as much as I admired it.

Ms. Delan's voice sounds clear, if a tad strident in the highs, and well integrated with the orchestra--out in front but not excessively so, just realistically placed. The orchestral accompaniment is not too widely spaced behind her but again realistically, and it provides a good stage depth. The overall sonic picture is smooth and gentle, nicely complementing the music.