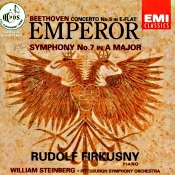 Some of the best releases from the major classical record labels have been old reissues. And why not? Classics have endured the test of time. Many of them have become old friends, and it's nice to see them freshened up and repackaged.

For example, the disc on hand: Beethoven's "Emperor" Concerto in the hands of Czech-born American pianist Rudolf Firkusny (1912-1994) fairly crackles with energy. Firkusny avoids excesses, indulging in little of the bravura we hear from Vladimir Ashkenazy (London), the nuance of Stephen Kovacevich (Philips), or the lyrical poetry of Wilhelm Kempff (DG), yet offering a performance of great strength and precision. Above all, it is Firkusny's crispness of attack that sets the interpretation apart. He appears to know exactly what he wants, and he gets it done with the least amount of fuss or bother. What's more, conductor William Steinberg obviously understands this approach and matches it perfectly with his Pittsburgh Symphony accompaniment.

The companion piece, Beethoven's Symphony No. 7, is likewise full of crisp energy. It dances along in the first movement and then proceeds most naturally to the gravity of the Allegretto. The Presto has requisite zip, and the Finale soars in a more than matter-of-fact way. Steinberg's reading hasn't perhaps the energy of a Fritz Reiner (RCA/JVC), the  lyricism of a Colin Davis (EMI), or the directness of a Carlos Kleiber (DG), but it carries a good tune.

EMI digitally remastered both pieces from original session tapes made in March and October of 1957 in what EMI called at the time FDS, "Full Dimensional Sound." Although the sound is strong on midrange, it's not particularly weighty in bass. Highs are not terribly smooth or extended, either, but, like the rest of the sonic image, they are clear and well defined. The piano sound is especially noteworthy for its clarity and articulation. There is some inevitable tape hiss noticeable in the quietest passages that should not be a concern except to those who place digital silence above everything else.

The disc makes an easy recommendation for its performances, with only minor hesitations about the decades-old remastered sonics.