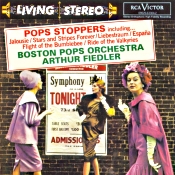 Here's another of those jaw-dropping recordings that make one stop and say, "How'd they do that over fifty years ago?" The answer is that the engineers of this "Living Stereo" offering from 1958 didn't know any better than to use relatively simple miking techniques.

By coincidence, I listened to this 1999 release the morning after I attended a concert with Kent Nagano conducting at Berkeley's Zellerbach Hall. I was immediately struck by how much this disc sounded like the real thing. (About once a month is as often as I get to hear live music, not nearly as much as I'd like. Audiophiles might want to listen even more often, just to learn what they're missing.) Maybe it was the seats we had had the night before and the fact that this recording struck just the right ambiance to duplicate the previous night's listening, I don't know.

In any event, the sound, recorded in 1958 by Richard Mohr and Lewis Layton, is close to real, but don't expect an audiophile's dream. It isn't. The midrange lacks ultimate clarity, the lower treble lacks a bit of sparkle, and the background noise, some of it from the musicians themselves, is occasionally noticeable. But mark the overall musicality, the breadth and depth of the orchestral picture, the proper resonance, the wide dynamics, and the deep bass. It simply sounds like real music.

Not all of the brief pieces on the disc come off sounding as persuasive as others, however. This is definitely a varied "pops" affair. Among the best tracks are the opening number, Gade's tango "Jealousie," Waldteufel's "The Skaters' Waltz," Liszt's "Liebestraum," Chabrier's "Espana," and especially Sibelius's "Alla Marcia."

Among those that do not fare as well are Ketelbey's "In a Persian Market," the "baksheesh" chorus sounding rough and ill placed; Sousa's "Stars and Stripes Forever," odd considering Fiedler must have known it backwards; and the Scherzo from Mendelssohn's A Midsummer Night's Dream.

Nevertheless, these are minor glitches in an otherwise fine set of sonic accomplishments. It hasn't the glitter or glamour of Fiedler's celebrated recording of Gaite parisienne from a few years earlier, but it's just as musical in its own slightly different way.