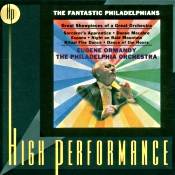 By the late Nineties, the folks at RCA had finally figured out what to do with all those old quadraphonic recordings they made in the early Seventies. If this disc was any indication, they probably thought they could remaster the whole lot of them in Dolby Pro Logic and 24-bit technology and market them in their "High Performance" series. But apparently they thought better of the idea. Although the sonic results here are not bad, they are a far cry from audiophile quality.

The disc is filled with showstoppers, things like Saint-Saens's Dance Macabre, Chabrier's Espana, and Falla's Ritual Fire Dance, some of them making a good impression, others not so much. And the sound is equally up and down. The single most outstanding characteristic of the album is the quality of the Philadelphia Orchestra, which sounds wonderfully lush and lustrous.

Eugene Ormandy was at the helm of the Philadelphia Orchestra for an amazing forty-four years, yet his catalogue of recordings restored to CD remains relatively meager, especially his output for RCA, a little better for Sony (CBS/Columbia). One can understand why, though. He simply did not produce enough critically celebrated albums. OK, I know that statement is not going to go over well with Ormandy's multitude of fans, but unlike some of Ormandy's contemporaries in America during hi-fi's golden age of stereo--Reiner, Fiedler, Bernstein, Solti, et al--Ormandy, with his fairly foursquare rhythms and conservative phrasing, was rather conventional in his approach to music making. These performances demonstrate the fact. They are perfectly acceptable and perfectly ordinary to the last. Which isn't, as I say, bad, just not good enough to endure very well the test of time.

RCA's sound, too, has its pluses and minuses. Producer Max Wilcox and engineer Paul Goodman recorded the material in 1971-72, and RCA digitally remastered it in 1998 in 24-bit Dolby Surround. In its favor, it is extremely dynamic, with occasional thunderous lows and clean, clear highs. Counting against these merits are its multi-miked two-dimensionality and its sometimes over-spacious acoustic when played back in regular two-channel stereo.

Some of the tracks sound reasonably free of this property--Ponchielli's Dance of the Hours, for instance, and Kabalevsky's Galop, probably the best piece on the disc. Nevertheless, much of the music sounds like it's adjusted to one of those overactive "Stadium" settings that hardly anybody uses on a surround-sound receiver.

In short, I wasn't exactly bowled over by Ormandy or his newfound sound of the day.