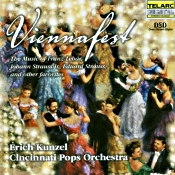 It had been a while since I last heard the late Erich Kunzel and his Cincinnati Pops doing a record for Telarc, so it was fun renewing an old friendship. Having remembered Kunzel's work with Telarc's Straussfest discs, I prepared myself for something a bit unusual in the way of waltzes and polkas, and that's exactly what Kunzel delivers. However, I didn't find it always in a good way.

In Viennafest we get a mixture of the traditional and the novel, all of it done up in reasonably good taste. The disc starts with an appropriately rousing curtain raiser, the "Radetzky March" by Strauss, Sr., and done in loud, boisterous, if somewhat mechanical fashion, followed by the overture from The Gypsy Baron. Then we have a polka, "The Huntsman," with a horse whinnying for effect.

Here are a few more selections, including one of the more controversial items on the program, the "Voices of Spring" waltz with a vocal part sung by soprano Tracy Dahl that you'll either love or hate, depending on what you're used to. A couple more novelty polkas come next, "At the Double" and Eduard Strauss's "At Full Steam," both featuring suitable sound effects. After those are Franz Lehar with the "Gold and Silver" waltzes and the "Siren of the Dance" waltzes from The Merry Widow.

Josef Lanner's "Court Ball" waltz is particularly nice, Robert Stolz's "Two Hearts in Three-Quarter Time" is delightful, and Strauss, Jr.'s overture to Die Fledermaus is as charming as ever. The proceedings come to a close with a fairly schmaltzy rendition of Rudolf Sieczynski's "Vienna, City of My Dreams," but what are you going to do: It is what it is.

Although Erich Kunzel may have sold probably more albums than almost anyone, he was never among my favorite conductors, generally taking things a little too matter of factly for my taste. This is especially noticeable in the aforementioned "Radetsky March" and also in the Lehar numbers, even if he is certainly felicitous enough in "Voices of Spring." Still, I prefer Willi Boskovsky, Herbert von Karajan, Lorin Maazel, Andre Reiu, and others in Strauss material to Kunzel's more relatively straight-arrow, largely uninspiring approach.

Telarc recorded the album using Super Bit Mapping Direct Stream Digital at the Music Hall, Cincinnati, Ohio in February 2000. The resultant sound is very smooth, as we have come to expect from this company, the bass drum always at the fore, with decent stage imaging, and a wide dynamic range. Nevertheless, the sound also appears to me a little thin in the midrange while at the same time a bit shy on the sparkle I had expected, as though Telarc had recorded things a tad more distantly than normal for them.

Anyway, the collection will please most of Kunzel's fans, even though I'm not sure any of the old Strauss family themselves would have usually had so large an orchestra at their command. Whatever, the current Johann Strauss Orchestra under Andre Reiu with its considerably fewer players (about two dozen or so) produces a more lustrous and transparent sound, and for a big, full ensemble it's still hard to beat the Vienna or Berlin Philharmonics.