Serenata: A Bouquet of Favorites for Strings (CD review) 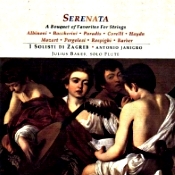 If you laid all the albums of string music in the world end to end, some hot new group would try to rerecord all of them. No need to rerecord this collection, though. It contains some splendid music, almost every short favorite for strings you can name. The amazing thing is that Vanguard Classics recorded them so long ago, 1957 and 1962. The recordings were good in their day and they're good now, even if some listeners may not appreciate all of the interpretations.

Every performance is as lively and energetic as you'd expect from this conductor and ensemble, Antonio Janigro and I Solisti di Zagreb, and from the repertoire represented. The program starts with a zesty rendition of Albinoni's Concerto a cinque in B-flat Major, with sonics of startling presence. The Super Bit Map remastering has not only clarified the sound, it has eliminated most of the background noise between the notes. However, it has not removed all of the noise accompanying the notes, so what we get can sound slightly rough or fuzzy at times.

The recordings themselves are a bit forward and bright, anyway, and the result is a little disconcerting at first. But one soon adjusts. The first nine tracks come from 1957 and actually sound the best of the lot; the later 1962 tracks display a fraction more static and low-end rumble.

Following Albinoni, there are Boccherini's familiar Minuet and Haydn's equally famous Serenade, requisite numbers in these kind of collections and pieces I continually mistake for one another. Janigro and his group do up both of them lovingly. The centerpiece of the album is Mozart's Eine kleine Nachtmusik, performed with as much verve as one could want. If it doesn't come across quite as smoothly Marriner's or as effortlessly as Boskovsky's, it's close.

Also on hand are Respighi's Ancient Airs and Dances Suite No. 3; Paradis's Sicilienne; Vaughan Williams's Fantasia on "Greensleeves," especially moving; Pergolesi's Concertino in G; Sibelius's Valse Triste; and, finally, a rather quick-paced version of Barber's Adagio for Strings that I had heard before from Janigro on an all-Barber anthology. This last one may be a matter of taste; Stokowski and Toscanini took it at about seven minutes; Janigro does it in six, although it doesn't sound particularly hurried, just a little too straightforward for my taste. I think, perhaps, the conductor was better in early music.

Overall, though, this is a fine collection of music, very well played. The audio, if not turned up too loudly, can sound superb as well. The collector will have most of these pieces already in his or her music library, but still a warmly recommended disc.