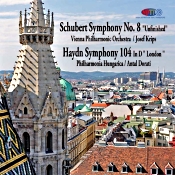 Austrian conductor and violinist Josef Krips (1902-1974) had recorded the Schubert Ninth Symphony with the London Symphony to great acclaim in 1959, so it was no surprise that he should also record the Schubert Eighth. However, he didn't get around to it for another ten years, this time with the Vienna Philharmonic, and fans didn't think the performance quite matched the sparkle and joy of his Schubert Ninth. Perhaps we can attribute the leisurely pace of Krips's Eighth to his older age; or perhaps he just felt a need to slow things down. It's certainly a more relaxed interpretation than we usually find, and whether it appeals to all listeners, as always, is a matter of personal taste.

Anyway, the Austrian composer Franz Schubert (1797-1828) started writing his Symphony No. 8 "Unfinished" in 1822 but left it uncompleted after only two movements. Although no one knows for sure why he left it unfinished, we do know that it wound up in the hands of a friend, Anselm Hüttenbrenner, who kept it in a drawer for the next forty-odd years before it finally premiered in 1865. The score for the two movements received publication a couple of years later.

The first movement begins with a brief, somewhat dark introduction before opening up to a more typically Schubertian theme and lyrical second subject. There follow several soaring melodies, rising to a grand climax, then a gentle receding of power to a final reprise and back to a slightly dark conclusion. Krips takes on the gloomier sections less sullenly than usual and offers up lighter, more sensuous moods in the lyrical segments, thus making the movement more of a whole than most conductors do. It's all quite engaging in its low-key way.

The second movement Andante begins slowly, again develops some lovely melodies, and moves on to a quiet, gentle finish. Here, Krips approaches the score as sweetly and gently as possible but without unnecessary sentimentality or schmaltz. Needless to say, the Vienna Philharmonic play this music as though born to it, and some of the players probably were.

Coupled with the Schubert is one of Hungarian-born conductor Antal Dorati's (1906-1988) celebrated Haydn recordings, this one of the Symphony No. 104 "London" with the Philharmonia Hungarica. As you no doubt know, Dorati was among the first conductors to record all 104 of Haydn's symphonies, so he knew what he was doing.

Joseph Haydn (1732-1809) composed his Symphony No. 104 in 1795 while living in London, and it would be his last symphony. It may have gotten its "London" nickname simply because he wrote it in London or because the final movement seems to evoke the sounds of London street vendors. Whatever, Dorati seems pleasantly involved in the music and conveys that spirit to the listener. His Haydn may not be as delightful as Beecham's or as energetic as Jochum's, but it is knowing and consistent. The Philharmonia Hungarica isn't as full or rich as the Vienna Philharmonic, but they acquit themselves nicely in the music.

The Schubert displays a remarkable clarity and a very wide dynamic range. Combined with a modest touch of orchestral depth, it provides a satisfying musical experience. While there is also a small amount of background noise if played too loudly, and while one hears some minor upper midrange brightness, these things should not prove distractions.

The Haydn sounds much the same as the Schubert, not unexpected as Decca recorded them only a few years apart and as the same engineer made both recordings. Still, the Haydn sometimes appears a tad smoother, even though it retains to some small degree the same slightly glassy "Decca" sound. The venue isn't quite as resonant at that in Vienna, nor do the sonics seem quite as dynamically wide; nevertheless, for all intents and purposes the two recordings sound remarkably alike, and both of them will doubtless provide much enjoyment.

For further information on the various formats, configurations, and prices of HDTT products, you can visit their Web site at https://www.highdeftapetransfers.com/.