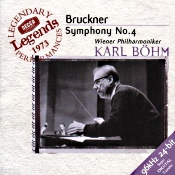 Everybody else was doing it in the late 90's; why not Decca? (You remember that in America Decca released their recordings under the "London" label for many years because there was already an American Decca. Then Universal bought both Decca companies so there was no more need for the "London" designation. It saved the world a lot of confusion.) Anyway, other labels were issuing newly remastered old classics in excellent sound--Mercury "Living Presence," RCA "Living Stereo," DG "Originals," EMI "Great Recordings of the Century," etc. So Decca called their line of reissues the "Legends" series, and among their first releases was Karl Bohm's fine, 1973 recording of Bruckner's Fourth Symphony. It made a good choice for inclusion in Decca's first batch of goodies.

Bohm's interpretation ranks high on my own list of all-time favorite Bruckner Fourths. I would still consider Otto Klemperer's performance (EMI) foremost for its greater majesty and stronger symphonic weight and structure, and maybe Eugen Jochum's older rendering (DG) next in line for its greater mystery and atmosphere, in spite of its thinner, noisier sound. But there is no denying Bohm's complete mastery of the score. The whole thing moves implacably forward with strength, grace, and style. In fact, the second movement Andante is perhaps more beautiful under Bohm than under any other conductor. Needless to say, the Vienna Philharmonic play exquisitely.

I think many people greatly underrated Bohm as a conductor, often thinking of him as merely a conservative "kapplemeister." Maybe he was sometimes, but not always. Here, there are no fussy heroics, true, just a simple distillation of the music. The work unfolds at its own pace and is all the more eloquent for it.

Decca's 24-bit remastering uses a 96k Hz sampling rate and some occasional touching up as the occasion demands. The result really is a superior end result (if not quite in the audiophile class, at least better than Decca's previous CD mastering of the recording). I had a friend over listening to this newer remastering side-by-side with Decca's 1992 ADRM mastering, simultaneously using two identical-sounding CD players. Initially, I did the switching and let him sit in the primary listening position. Then we exchanged places and opinions. He said exactly what I was thinking, so I'll use his words. The new version sounded "bigger," "smoother," "warmer," "fuller," "richer," and "more detailed." The older mastering sounded "harder," "harsher," and "brighter."

However, I continue to find the sonics a little less than perfect. There remains a metallic edge that the new processing has reduced but not removed. Nevertheless, I can confidently recommend the disc, and I know it will provide hours of pleasurable listening.

Incidentally, Decca came up with two clever packaging ideas here: First, they gave the disc itself the appearance of an open-reel tape. Second, they replicated the original cover art on the back of the booklet insert. By simply reversing the booklet one can have either the new cover illustration or the old. It's distinctive. And, incidentally again, a few years after this "Legends" release, Decca rereleased the same 96k/24-bit remastered recording in their "Originals" lineup. It's hard to know the players without a scorecard these days.