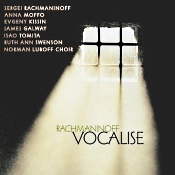 Sergei Rachmaninoff (or Rachmaninov) wrote fourteen songs in 1912, published as his Op. 34. The concluding song has no words; titled simply "Vocalise" it has come down to us as probably the best known piece in the set. While it has no really catchy melody, it possesses a hauntingly beautiful charm that has been interpreted and transcribed many times over for solo voice, solo instruments of every kind, chorus, and full orchestra.

So, some years ago RCA went through their archives pulling as many different versions as they could find and collected them on this disc. The result is not so much an album one might enjoy straight through as it is a disc from which to play favored choices. If your player has a memory chip for favorites, this is a CD to program permanently.

The selections range in recording date from 1929 through 1995, with no particular order except possibly the reissue producer's personal preference.

The disc begins with Anna Moffo's vocal rendition with the American Symphony Orchestra under Leopold Stokowski (1964). It is perhaps the highlight of the collection and deserves its number-one billing.

Among the purely orchestral versions, Rachmaninoff's own with the Philadelphia Orchestra carries the stamp of authority in spite of its early, 1929 sonics. Morton Gould's rendering with his own orchestra (1960) is the most dreamily romantic of the lot. Then we find Yuri Termirkanov's interpretation with the St. Petersburg Philharmonic (1991) the best recorded.

Among solo instrumentalists, James Galway's flute transcription with Charles Gerhardt and the National Philharmonic carries the day (1976). It is seductively airy and lilting. The Norman Luboff Choir do a big-scale production number (1961) of the piece. Next, Wolfram Huschke and Dieter Huschke perform an intimate cello and piano duet arrangement (1995), and Vladimir Spivakov and Sergei Bezrodny do a violin and piano arrangement (1991) that make nice contrasts.

Among the oddities are a lovely account of the score by countertenor Brian Asawa and a bizarre one by Isao Tomita and the Plasma Symphony Orchestra (1964) that sounds exactly as you would imagine. Evgeny Kissin plays a piano arrangement (1993), and Vitya Vronsky and Victor Babin do a piano duet (1940).

Among purely orchestral versions I still prefer Previn (EMI) or Stokowski (EMI), but this unique array of realizations from RCA gives us some idea just how good Rachmaninoff's "Vocalise" actually is. If you can't find something to like here, you're maybe not a real music lover.