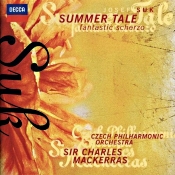 In America, Josef Suk (1874-1935) may be better known as Dvorak's son-in-law than as a musician, but in Czechoslovakia he is more famous. He was first a student of Dvorak and then married his daughter. But both his mentor and his wife died in the years 1904-05, devastating the composer. His subsequent work, especially the Asrael Symphony (1906) and Summer Tale (1909), marked a change from the light Romantic fare he had been producing. Asrael had been a kind of philosophical working out of his grief; then its sequel, Summer Tale, recorded here by Sir Charles Mackerras and the Czech Philharmonic, demonstrated he had overcome his heartbreak through, as he said, "the healing power of nature."

Although the disc's accompanying booklet insert describes Summer Tale as an antidote to the "bleakness of much of Asrael," it is still fairly gloomy, with only a glimmer of sweetness at the very end. Constructed in five movements, this big orchestral work begins with an enigmatic, shimmering section called "Voices of life and consolation." It has an impressionistic quality to it that is fairly becoming, obviously symbolizing the break of a new and promising day. The second movement, "Noon," has less personality; it appears mainly to be an evocation of midday heat. The third section has the most provocative title, "Blind musicians." It sounds melancholy and repetitious, possibly inspired by Suk's coming across a real group of blind musicians endlessly repeating a mournful tune. The fourth movement is a strange scherzo, "In the power of phantoms," which sounds vaguely sinister. Then the work ends aptly enough with "Night," full of wistful yearning and concluding on an upbeat note of hope.

Coupled to Summer Tale is one of Suk's earlier works, Fantastic scherzo. It is about as different from Summer Tale as one could imagine, written at a time (1903) of great joy in the composer's life. It is delightfully optimistic, Mendelssohnian in its mood and structure, and shows us where Suk's music might have led had not tragedy intervened.

Sir Charles presents Summer Tale with dramatic flair, capturing the rare beauty of the landscapes (and dream scapes) wonderfully. He brings out the sinister qualities of Suk's music quite well, too, all the while remaining attentive to Suk's brilliant, graceful, curving rhythms. With Fantastic scherzo, Mackerras is lighter, appropriate to the mellifluous melodies. Equally important, the Czech Philharmonic plays with the opulent exactitude of the best orchestras in Europe. All in all, conductor and players make beautiful music together.

Decca's 1999 sound for Mackerras and the Czech Philharmonic appears somewhat subdued, perhaps as befits the music itself, but turned up a bit it produces some good color, contrast, and depth. The strings are particularly lovely, and the frequency extensions and dynamic range are up to Decca's usual high standards.

Email ThisBlogThis!Share to TwitterShare to FacebookShare to Pinterest
Labels: Suk