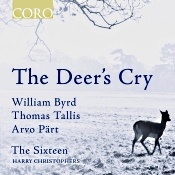 The juxtaposition of works on this album by modern Estonian composer Arvo Part (b. 1935) and Renaissance English composers William Byrd (c. 1540-1623) and Thomas Tallis (c. 1505-1585) may at first blush seem odd. Yet the combination works surprisingly well.

As almost everyone knows by now, The Sixteen and its founder and conductor Harry Christophers are a vocal and period-instrument ensemble founded by Mr. Christophers in 1977. They deal largely in Renaissance, Baroque, and early Classical repertoire but have obviously here expanded their scope to include modern music. With over 130 recordings and numerous awards to their credit, one can understand their critical and popular success.

So, why include the music of Arvo Part among that of Byrd and Tallis? Well, although both Byrd and Tallis wrote some secular music, the bulk of their output was sacred. Byrd, for instance, wrote sacred music for use in Anglican and Catholic services, and Tallis (Byrd's teacher, by the way) worked at a Benedictine priory, Waltham Abbey, Canterbury Cathedral, and the Chapel Royal, among other places. And of Part? He, too, writes both classical and religious music. In fact, he is one of the most important and certainly one of the most prominent of today's composers of spiritual music. Yes, as I said, the combination of composers on the album works.

As always, The Sixteen sing in a heavenly manner, and their voices sound rich and full in harmony, their intonation flawless, and their commitment to the music as emotionally vibrant as ever. What we've got as a result is beautiful music, beautifully performed.

Now, what did I like best? That's hard to answer because everything about the music and the singing is so letter-perfect. Of course, the Byrd and Tallis pieces go without saying. Their music has stood the test of time and been enjoyed by and inspirational to people for centuries. However, Part's music in particular impressed me, starting with the album's title tune, The Deer's Cry. Like the other two of the composer's selections, it's partly new, partly old; partly modern, partly ancient. Obviously, Part is a man of many parts. Sorry. The Deer's Cry is an updated setting of an incantation written in the fifth century. It's appropriately solemn yet wonderfully uplifting. The Woman with the Alabaster Box sets a narrative from Matthew 26:6-13. But equally impressive is Nunc dimittis, written in Part's tintinnabular or bell-like style; it's beautiful, and as with the rest of the album the singers do it full justice.

Producer Mark Brown and engineer Mike Hatch recorded the album at the Church of St. Augustine, Kilburn, London in October 2015. Here is the only minor fly in the ointment: The venue is highly reverberant, and, consequently, voices sometimes appear to have a touch too much bloom and echo to them. Still, the ambient glow makes the choir sound more "heavenly," even it doesn't do as much to clarify the album's transparency as it could. There is also a slight upper midrange brightness to the sound, which doesn't hurt and probably actually helps make the voices appear more distinct. There is much to like here, so I'm not really complaining.