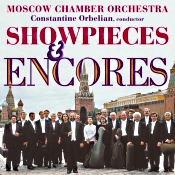 Sir Thomas Beecham might have called these selections "lollipops." This 2001 release calls them "Showpieces & Encores," but I think they're closer to simple songs and encores--short, two-to-seven minute works designed to satisfy an audience's demand for a little something and maybe leaving them wanting just a little more. "Showpieces" implies to me virtuosic spectacle, and these selections seem more subdued, more low-key, than that. There are nineteen tracks in all, some familiar, some not, many featuring solo players on violin, viola, cello, or flute, and five "Armenian Folk Songs" getting the bulk of the love.

The Moscow Chamber Orchestra, about twenty players and their leader, American-born Constantine Orbelian, as always perform with elegance and refinement, qualities that show up admirably in things like Tchaikovsky's Waltz from the Serenade for Strings, Gershwin's "Summertime," Rachmaninov's Vocalise, and, especially, Frank Bridge's Valse-Intermezzo.

Still, I wish Orbelian and his group had let loose a little more, put a little additional fire into some of the music. We see glimmers of lively animation in Shostakovich's Spanish Dance, but most often Orbelian is content to demonstrate to us the beauty and grace of the compositions. Fair enough. I also enjoyed his scattering among the more popular choices a few lesser-known Russian favorites like Sinisalo's "Three Russian Folk Songs" and other tunes like "The Moon Is Shining" and "The Rush Light." The performances appear more than just polished, however; they display a sense of loving care and genuine affection that is hard to resist.

The cover picture shows the orchestra in Moscow, but, in fact, Delos made the recording at Skywalker Ranch, in the sound building at what was then George Lucas's place (now Disney's) in Marin County, California. It's good sound, my only quibbles being that there is a touch of brightness from time to time and the occasional soloist seems a mite too close compared to the rest of the players. Otherwise, there is good detail; a soft, warm, natural ambiance; and a moderate depth to the sonics.

It's a lovely, if perhaps redundant, collection from an impressive group of musicians.