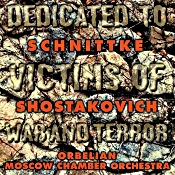 This disc prepares you for the unyielding material it contains by declaring on the cover, "Dedicated to Victims of War and Terror." Conductor Constantine Orbelian's grandparents were victims of such injustices in Stalinist Russia before the Second World War, so the program material he selected has special meaning for him.

Soviet Russian conductor and violinist Rudolf Barshai transcribed the Chamber Symphony from the String Quartet No. 8 by Soviet composer and pianist Dmitri Shostakovich (1906-1975). Shostakovich wrote the Quartet in 1960 and dedicated it "To the Memory of Victims of War and Fascism." Today, of course, we may read into it, "victims of war, fascism, and Stalinist Communism." At the time, however, Shostakovich felt very depressed at being forced to join the Communist Party. Some musical historians say that the composer's personal despair is what gives the piece its edge, its pain, and its emotional depth.

The outer movements reflect a pensive solemnity and gloom, while the inner movements project an intense fierceness and anxiety. Certainly, Orbelian emphasizes the work's subjective aspects throughout, painting a vivid, harsh, even brutal picture of dark times, unrelieved by any happy or triumphant ending.

Following up the Chamber Symphony with Alfred Schnittke's Piano Concerto, performed by Orbelian himself on piano, works as the mitigation we seek after the stormy despondency of Shostakovich. Built as a series of variations that come and go, some of them religious in nature, the Piano Concerto produces the effect of mild spiritual elation and inner questions and answers by its end.

The sound is quite large, possibly because of the size of the venue, moderately distanced as always from this source, and again only moderately well detailed. At first, the sound appears somewhat dark and muted, but in the Piano Concerto especially, one can hear the notes die away smoothly in the extreme high frequencies. Perhaps it's that there is a degree of density about the sonics that makes everything seem a touch less transparent than it could be. It is not an unrealistic sound, however; in fact, it's the sound one can hear in most auditoriums around the world. It just isn't what we hear too often on disc, and it comes as a pleasant surprise. As far as concerns the surround element, it does not emerge as a serious consideration one way or the other in the two-channel format to which I listened. There is a agreeable ambient bloom that does fair justice to the music. And it is the music that counts.

Of its kind, the program is powerful, and Orbelian and his forces play it with urgency.