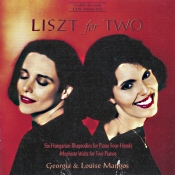 We are all more or less familiar with the orchestral arrangements of a half dozen of Franz Liszt's nineteen Hungarian Rhapsodies for Piano, but what is less well known is that he adapted them for piano duos (one piano, four hands), too.

Just when or why Liszt made the later duet arrangements nobody's quite sure, but as the accompanying booklet explains, Liszt did play them with students in his later years. A handy chart in the booklet provides the new numbering of the duos, as well as of the orchestral versions. The original piano solos that get the duo and orchestral treatments are Nos. 2, 5, 6, 9, 12, and 14.

The Mangos sisters, Georgia and Louise, play the works with appropriate gypsy flair, although it turns out that none of the tunes Liszt employed were genuine folk songs at all but "popular light music that the gypsies had transformed into their own unique performing style." In any case, the Mangos ladies perform all of it with an effortless spirit, yet with a degree of lyricism not commonly associated with the pieces. Their manner seems a touch lighter, less flamboyant, and more poetic than the best solo interpretations I've heard. Of course, for two sets of hands, the Rhapsodies sound richer and fuller than usual, and they take a moment's getting used to. Then, the sisters do the Mephisto Waltz No. 1 coupling as arranged for two separate pianos, and that appears richer still.

The recording is another of Cedille's demo-quality productions, made by the team of producer James Ginsburg and engineer Bill Maylone. The piano sound is as natural, as well balanced, and as well detailed as anything I've heard, miked at a moderate distance with enough room ambiance to ensure a realistic presentation. In fact, the dynamics of the production make the whole thing sound as though you're sitting in front of the performers live as they play.

Finally, I hope you will forgive me for a totally uncalled-for aside: Upon reaching No. 4 in D minor, based upon the popular No. 2 in C# Minor, I couldn't help thinking as I listened to four hands playing the piece of the old Looney Tunes cartoon with Bugs and Daffy Duck trying to outdo one another. No, it bears no relationship to that silliness, but, still, old stereotypes die hard.

This is another outstanding Cedille recording, both musically and sonically.