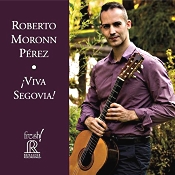 This is, I believe, the third album in a series of Reference Recordings Fresh! recordings of music dedicated to or commissioned by the virtuoso Spanish guitarist Andres Segovia, the program again performed by guitarist Roberto Moronn Perez. The disc contains selections from seven composers, all of them originally published in the Segovia Archive Series.

"If today we can talk about the guitar as a concert instrument, it is undoubtedly thanks to Andres Segovia (1893-1987). His charisma, both as a person and as an artist, was a magnet for composers eager to write music for him, and to give to the guitar a repertoire of the quality available to other classical musicians. Until then, it had been mainly restricted to music written by guitarists themselves." So writes Mr. Perez in a booklet note for the present album. He goes on to say, "My goal in this recording, as it was in my two previous ones, is to put together a high-quality programme of little-known, or in some cases, almost totally neglected gems excluded from the guitar repertoire, and to bring new life to these works, playing with the conviction that this music requires."

As I said about Mr. Perez in an earlier review, he does justice to each composer. Perez plays with flair but also with nuance and subtlety. His guitar opens up each work and expands it seemingly beyond the limits of a single instrument. Although you won't find any (or if you are a dedicated classical guitar fan, many) familiar pieces here, if you are like me you will find each work entertaining, touching, or enlivening.

The program begins and ends with the Swiss composer Hans Haug (1900-1967), starting with the lighter, showier Etude (Rondo fantastico) and ending with the heavier Passacaglia. The former allows Perez to get things off to a zesty start (and display his dazzling finger work); the latter, a more solemn affair, reminds us just how well the guitarist can shade a piece.

Next, we get Sonatina by the English composer Cyril Scott (1879-1970). It's in three movements labeled Adagio quasi introdustione, molto moderato; Allegretto pensoso; and Finale. It's quite lovely, and it offers Perez the opportunity for some wide contrasts in style and tempo.

Following the Berkeley numbers we have Sonata in mi by the Italian composer Ettore Desderi (1892-1974). The four movements are Preludio, Arioso, Scherzo, and Toccata. Perez plays the work just as I would imagine Desderi intended: in a simple, straightforward, disciplined manner, the music all the more appealing for the approach. The Scherzo is especially charming, the Toccata imposing.

Then there is a single piece each from the Swiss composer Aloys Fornerod (1890-1965): Prelude; and the only female represented on the disc, the Swiss composer Fernande Peyrot (1888-1978): Theme et variations. Perez performs them with style and refinement.

Producer, engineer, and editor John Taylor recorded the album at Holy Trinity Church, Weston, Hertfordshire, UK in October 2015. As with the previous albums in the series, Keith O. Johnson of Reference Recordings did the final mastering. Taylor recorded Perez and his guitar at just the right distance to capture a realistic presence, with a slight reverberation and a mildly warm flavor. Detailing is not as crystal clear as it might be with a more close-up miking arrangement, but everything sounds rich and lifelike.