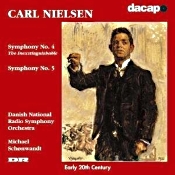 The late nineteenth, early twentieth-century Danish composer Carl Nielsen (1865-1931) was unusually prolific. He not only wrote six symphonies, he did operas, concertos, chamber music, piano and organ music, and songs. American audiences probably know him best, though, for the two pieces represented on this disc, the Fourth and Fifth Symphonies. Given, then, that the disc presents his most accessible material, that it's performed by a Danish conductor and orchestra, and that it's framed in excellent sound, it amounts to a good buy for listeners who don't already have favorite copies of these items.

The Fourth Symphony, known as "The Inextinguishable," is the more Romantic of the pair, the closer to Nature, and, because of its structure, somewhat the more unified. Nielsen wrote the symphony's four movements to flow into one another without interruption, something nicely observed in this recording. And, thanks to the clarity of the soundstage, the various bird calls and animal murmurings come across quite distinctly. Life, according to this music, is "inextinguishable," forever running onward in one great movement in its will to live. Nielsen premiered the Fourth Symphony on February 1, 1916.

It is the Fifth Symphony, however, that is the more provocative of the two works, thanks largely to its first movement snare drums. They tend to march onward to their own beat, perhaps like Nature moving inexorably forward as it had in the composer's Fourth Symphony. But the Fifth, after its quiet opening and increasingly insistent drums, opens up further after its first couple of movements into extremely active and vivacious third, fourth, and fifth movements, leading to a finale that is almost harsh by comparison to the composer's earlier work.

Maybe it is here that Dacapo's sometimes bright, forward sound is most helpful, not only in illuminating orchestral detail but in making a case for the composer's intentions in showing how Nature can unfold into pure energy. Whatever the case, Maestro Schonwandt and his Danish National Radio Symphony Orchestra maintain a firm grip on the goings on and deliver some fine music making. While one could perhaps fault the conductor a bit for not entirely capturing the sheer rigorousness of Nielsen's scores, he produces a more than adequate if somewhat measured glimpse into Nielsen's visions of Nature.

Does Schonwandt's recording eclipse Herbert Blomstedt's more refined San Francisco account of this same coupling on Decca or Sakari Oramo's more vigorous Stockholm interpretation on BIS? I think not, but it's close.

Incidentally, I see what appears to be the same recording now issued by Naxos, so that, too, may be an alternative choice if the spirit moves you.

Email ThisBlogThis!Share to TwitterShare to FacebookShare to Pinterest
Labels: Nielsen