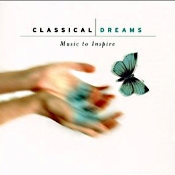 Think of the most dreamy, most tranquil, most serene musical works you can imagine, put them all together in a two-and-half-hour package, and you'll get some idea of what this album is about. Back in 2001, compilation producer Robert Laporta (currently of MSR Records) collected twenty-seven individual items here from the Virgin Records catalogue, ranging from two to ten minutes each for a two-disc Virgin set. The result is, well, dreamy.

There are too many things on the set to name individually, but let me give you some idea of the contents by naming just a few. The contents include Mahler's Adagietto from Symphony No. 5; Satie's Gymnopedies Nos. 1 and 3; Faure's Pavane; Debussy's Prelude to the Afternoon of a Faun; Elgar's Serenade for Strings; Barber's Adagio for Strings; Sibelius's Swan of Tuonela; Vaughan Williams's Fantasia on "Greensleeves"; Ravel's Pavane pour une infante defunte; Massenet's Meditation; Rachmaninov's Vocalise, and a ton more.

Laporta drew the recordings from the years 1988-1995, and all of them have a homogeneity of sound that complements one another. Mostly, it's smooth and natural, wide spread, and not very dynamic (because it doesn't need to be). I have no idea if the Virgin engineers altered the audio of these pieces in any way for them to sound so similar, but the results, especially with the works themselves played almost without breaks between them, appear to flow like one continuous stream.

This may be the ultimate in music for relaxation. What's more, it's great music well played, too, not New Age stuff  unworthy of actually paying attention to. So, I can easily recommend the set, even though you've probably got every piece somewhere else in your collection.