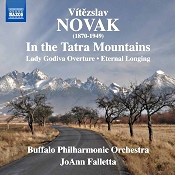 Possibly not a lot of classical-music fans in America recognize the name of Vitezslav Novak, but in his native Czechoslovakia it might be different. Novak (1870-1949) was a Czech composer whose career pretty much paralleled that of German composer and conductor Richard Strauss. And to an extent, Novak's music even seems partly influenced by the tone poems of his more-famous contemporary. As both men were born in the latter part of the Romantic era of classical music making and lived well into the modern age, one can find elements of both styles in the composers' works.

On the present disc, JoAnn Falletta leads her Buffalo Philharmonic in three brief descriptive pieces by Novak: In the Tatra Mountains, the Lady Godiva Overture, and Eternal Longing. If there's any drawback to the program, it's that despite including three pieces, it's rather short on quantity, the disc containing only about fifty-two minutes of music. But it's quality that counts, and Ms. Falletta does a fine job illuminating the color, excitement, solemnity, and nationalism of the works involved.

First up is In the Tatra Mountains, a symphonic poem from 1902. As you might expect from the title, it is a musical representation of a mountain range Novak knew well. It's largely a sweet, bucolic piece, caressed lovingly by Ms. Falletta and her Buffalo ensemble. When it builds energy in the middle section (the inevitable thunder storm), Falletta is up to the task yet doesn't overplay her hand. The increase in tension and conflict comes smoothly and organically, like the mountains themselves. She handles the music deftly, poetically.

Next is the Lady Godiva Overture from 1907. Written in only two days, it became nevertheless one of Novak's most-popular pieces, dramatic and theatrical in its presentation. In this latter regard, it stands in stark contrast to the lyrical flow of the preceding work, the overture far more active and, frankly, more mundane. Nevertheless, Ms. Falletta invests it with a histrionic urgency appropriate to its Romantic leanings.

The final piece is Eternal Longing, written in 1905 and based on a poem by Danish author of fairy tales Hans Christian Andersen and a setting by Jaroslav Vrchlicky. This is the most evocative of Novak's music on the disc, conjuring up dark, haunting landscapes and seascapes of mystery and suspense. Again, Falletta and her players adjust well to the composer's demands and offer up a lustrous account of this sometimes overlooked score.

Producer, engineer, and editor Tim Handley made the recording at Kleinhans Music Hall, Buffalo, New York in June 2016. The sound seems typical of most good Naxos products. It's slightly soft and warmly ambient without being too mushy or reverberant. It's fairly transparent and well detailed without being too bright, too forward, or too very edgy. The sound spreads out widely across the soundstage without leaving holes in the middle. It's also dynamic without knocking a listener out of his seat. It's realistic and pleasant without calling attention to itself. While there is some harshness to the upper frequencies in louder passages, it's not enough to distract one from the music making.

One caution: The opening piece, In the Tatra Mountains, begins so softly it may tempt one to turn up the volume. I advise not doing so. It will get louder soon enough, and one may find oneself having to readjust the level before long.

Email ThisBlogThis!Share to TwitterShare to FacebookShare to Pinterest
Labels: Novak