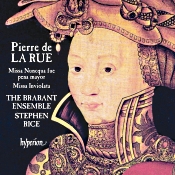 For those of you who, like me, don't know much about Pierre de la Rue (c. 1452-1518), according to Wikipedia he was "a Franco-Flemish composer and singer of the Renaissance. A member of the same generation as Josquin des Prez, and a long associate of the Habsburg-Burgundian musical chapel, he ranks with Agricola, Brumel, Compère, Isaac, Obrecht, and Weerbeke as one of the most famous and influential composers in the Netherlands polyphonic style in the decades around 1500."

On the present album, we get two of La Rue's masses--Missa Nuncqua fue pena mayor and Missa Inviolata; one motet (a highly varied, unaccompanied choral composition, usually on a sacred text), Salve regina VI; and one Magnificat (a hymn praising the Lord, sung at prayer), Magnificat sexti toni. Stephen Rice leads The Brabant Ensemble in each of the works.

Now, for those of you who, like me, don't know much about The Brabant Ensemble, they are an early music choir based in Oxford, England, who have well over a dozen record albums to their credit. (Actually, the La Rue disc is their sixteenth recording.) According to their Web site, the group "takes its name from the Duchy of Brabant, an area now forming parts of northern Belgium and the southern Netherlands, from which the majority of its repertory is drawn. It was founded in 1998 by Stephen Rice in order to perform the so far under-exposed sacred music of the mid-sixteenth century." And International Record Review describes the ensemble as "perhaps England's most accomplished interpreter of Renaissance sacred music." A booklet picture indicates thirteen singers comprise the chorus--seven men and six women--plus their leader, Stephan Rice.

First up on the program is the Missa Nuncqua fue pena mayor ("Never was there greater pain"), composed around 1500. The striking thing here is that although the singers are communicating a serious subject in the work's various sections (Kyrie, Gloria, Credo, Sanctus and Benedictus, Agnus Dei), they always sound life-affirming and, dare I say, joyous. The choir is uplifting in that they sound as though they are enjoying what they're doing. Most important, as well, they are as expert, precise, nuanced, and passionate as any ensemble could be.

Next, we get Salve regina VI, the sixth and final motet of a series La Rue wrote for the Marian antiphon. It provides a brief, sensitive, and lovely interlude between the longer masses.

After that, we find the Missa Inviolata ("Mass Inviolate," "Virginal Mass," or "Sacred Mass"), written a few years after the mass discussed above. What's more, it sounds slightly lighter and a touch more fanciful than the preceding mass. As always, the choir sing heavenly, with Rice never rushing them but leading them to produce a sweetly gentle presentation.

Finally, the program closes with Magnificat sexti toni ("Sixth tone setting"), which may be the most-charming of all the sacred music on the disc. It provides a touching conclusion to an album that must rank high on the list of recordings any lover of vocal music might enjoy.

Producer Adrian Peacock and engineer Phil Rowlands recorded the music at the Parish Church of St. John the Baptist, Loughton, Essex, in August 2015. The church offers a fine setting for the choir, and the microphone placement picks up a good deal of the venue's natural ambient bloom. The voices appear as they might in a real-life situation, with a resonant glow around each note and enough distance that the performers aren't in our face. Yet the voices are also clear and true, remarkably well defined, with a accuracy of placement across the sound stage that is ideal. It's about as perfect a massed vocal recording as you'll find.