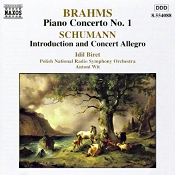 One of the resident pianists of the Naxos label, Idil Biret, was bound to get to the Brahms First Piano Concerto sooner or later, and in 2001 she got there.

After one of the longest introductions to any concerto anywhere, the piano finally makes its entrance at about the four-minute mark, providing the pianist has stayed around long enough to come in on time. Ms. Biret attacks the opening movement with vigor and pounds out the notes in appropriately heroic fashion. If she misses some of the craggy work's subtler moments, especially in the Adagio, she more than makes up for it in pure adrenaline.

I especially enjoyed the closing Rondo where the massive structure of the concerto's beginning gives way to a more lyrical yet still energetic tone. Ms. Biret seems more at home here and concludes the piece in a most poignant manner.

Frankly, though, I liked Ms. Biret's work in the companion piece, Robert Schumann's Introduction and Concert Allegro, better than her work in the Brahms. Schumann's piece, written in 1853, his late period, is a kind of condensed piano concerto in a single, fifteen-minute movement. It works fine, and Ms. Biret brings out the poetic charm as well as the Romantic bravura in it. Meanwhile, the Polish National Radio Symphony Orchestra play about as well as one could want, although they are not really in the class of the Berlin Philharmonic, the London Symphony, or the London Philharmonic.

The sound of the disc is typical Naxos of the day, meaning the orchestra appears a little thick, dark, and soft, while the piano remains firm and clear. The sonics have good range, too, good stereo width, and at least a moderate depth of image.

Still and all, in comparison to rivals in the Brahms like Giles on DG, Curzon on Decca, and Kovacevich on EMI or Decca/Newton Classics/Philips, the listener may find both the sound and the performance on the Naxos issue a bit wanting. The two earlier competitors, Giles and Curzon, are framed in more transparent, if slightly noisier, analogue sound; and Kovacevich on the newer EMI has the advantage of a quieter digital recording. Nevertheless, if price is a consideration, there is always the fact that this release isn't probably going to cost you as much as the others mentioned. You get what you pay for.