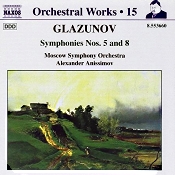 I've mentioned this before, but it bears repeating. If the name of Russian composer Alexander Glazunov (1865-1936) conjures up little more in your memory banks than the Raymonda and Seasons ballets, you're probably not alone. He is one of those very fine composers that people know today for mainly just a couple of things even though he composed a huge quantity of stuff. Fortunately, in the late 1990's and early 2000's the Naxos label sought to make Glazunov's symphonies better recognized through a series of recordings with Alexander Anissiov and the Moscow Symphony Orchestra.

Glazunov  premiered the Eighth Symphony in 1906, his last completed large-scale piece. It is a big symphony, to be sure, and typically Russian: weighty, resonant, and momentous, and, yes, in part a little menacing. Its most interesting movements are its second and third. The slow second movement has a particularly lyrical and serene central portion that would charm almost anyone. Then the tumultuous third movement scherzo provides an ideal contrast to the preceding repose. Fun stuff.

Nevertheless, it's the Fifth Symphony that most impressed me. It may not display the same command of symphonic forces that the later Eighth does, but the Fifth has a wonderful combination of styles that range from Rimsky-Korsakov to Mendelssohn. At times you'd swear you were listening to one of Rimsky's colorful tone poems and at other times you'd think you were in one of Mendelssohn's enchanted fairy forests. It's really quite delightful, and we must congratulate Maestro Anissiov for his splendid work.

The sound Naxos delivers here is among the best from this source. They provide the Moscow Symphony splendid, natural sonics, with an excellent orchestral bloom, reasonable depth of field, and no untoward prominence of any single instrument. The sonics are perhaps not the utmost in transparency nor is there much deep bass, but there is none of the soft, fuzzy, overly resonant acoustic we sometimes get from the Moscow Orchestra, either.

The disc's reasonable cost (especially now that used copies are so readily available) makes it easy for anybody to sample Glazunov's talents, the Moscow orchestra under Anissimov makes it easy to listen to, and the music takes care of itself in offering the differing sides of this fascinating composer.

Email ThisBlogThis!Share to TwitterShare to FacebookShare to Pinterest
Labels: Glazunov