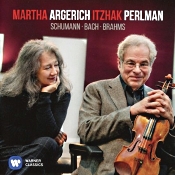 What do you get when you pair two of the world's greatest classical artists--Martha Argerich and Itzhak Perlman--on the same album?

You get beautiful music.

Interestingly, both artists were born just a few years apart, and both artists came to prominence at about the same time in the late Fifties and Sixties. So their careers sort of parallel one another. And, of course, both artists have won numerous awards and competitions and produced countless albums. It's a pleasure hearing them work together on the present disc.

The first thing up on the program, the Sonata for piano and violin No. 1 in A minor, Op. 105, by Robert Schumann (1810-1856), is a piece they recorded live in Saratoga, NY in 1998. It was also the first time they had ever performed together. Although the title tells us it's a piece for piano and violin (and the accompanying booklet tells us it's "a duo of equals"), it's really the violin that tends to dominate the work. As always, Perlman never showboats or inflates the score; while he is a consummate artist with virtuosic skills, he is also a fairly conservative musician who never allows his own playing to upstage the music. Thus, with fine, if somewhat studied accompaniment from Ms. Argerich, the score comes off in fine style, with Romantic, and slightly dark, overtones but never sentimentalized. The pair end it in on a stormy yet vibrant note.

The next three selections the performers recorded more recently, 2016, in Paris and without an audience. These begin with Schumann's Drei Fantasiestucke for piano and violin, Op. 73 ("Three Fantasy Pieces for piano and violin"). These works have a more lyrical quality than the sonata and are more cheerful in their countenance. Perlman and Argerich play them with an appropriate sweetness.

Next is the Scherzo in C minor from the F-A-E Sonata, Wo02, by Johannes Brahms (1833-1897). Here, we find a more-ardent piece of music that Brahms wrote as a young man (at the suggestion of Schumann). Here, too, Ms. Argerich's piano plays an even more-dominant part in the proceedings. The result is not earthshaking, but it is fun and fiery in its way.

The final and longest item on the agenda is the four-movement Sonata for keyboard and violin No. 4 in C minor, BWV 1017, by Johann Sebastian Bach (1685-1750). Of course, Bach would have used a harpsichord, but times change. After the Romantics Schumann and Brahms, we might have expected a far different classical Bach, yet Perlman and Argerich tend to give us more of a nineteenth-century interpretation than an eighteenth-century one. It all sounds very refined and well polished, with Ms. Argerich taking a more-commanding part in the second-movement Allegro. While both performers are as polished as ever, they also exude a rhythmic charm and vitality that is quite beguiling.

My guess is that Warner Classics did their best to make the two recordings, live and studio, sound as much alike as possible. So, in the first selection--the live Schumann sonata--the sonics are warm and smooth, with virtually no background noise. Still, during the silent moments, one feels the presence of the audience. It's of no concern, really, so the music comes through realistically, if a tad close-up.

The more-recent, non-live performances are even warmer and smoother than the live one, these later recordings sounding equally close-up. Nevertheless, the balance is lifelike, with both performers appearing as one might hear them from the first rows. Ultimate transparency, however, is a bit diminished by the relative softness of the sound. Still, it's all very easy to like, which is the main thing.