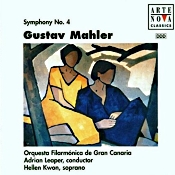 What do you mean you've never heard of the Gran Canaria Philharmonic before? Gran Canaria is the principal island in the Canary Island group, and its orchestra has been in existence since 1845. The remarkable thing about this little-known ensemble is how very good they are. They may not sound as lush or opulent as the Berlin Philharmonic or the Concertgebouw of Amsterdam, but they play with a polish and precision that puts a lot of other famous ensembles to shame. Their rendition of the Mahler Fourth under conductor Adrian Leaper is quite almost as good as any on the market and comes at a budget price to boot.

Leaper's interpretation is fairly direct, reminding me slightly of Haitink's performances. There is little room in the bucolic Fourth for too much flamboyance, anyway, and Leaper directs his group on a properly straightforward, if not particularly imaginative, course. The first and third movements are appropriately idyllic, but I admit I would have liked a little more sinister excitement in the second movement and perhaps a touch more childlike purity from soprano Hellen Kwon in the finale. Otherwise, the reading nicely conveys Mahler's quasi-religious moral intentions in an honest manner.

Arte Nova recorded the work in 1996, two years before David Zinman and his Tonhalle Orchestra Zurich would put Arte Nova on the map with their outstanding Beethoven cycle. The sound of the Mahler is ultra clean and fairly clear, its only drawback being a certain lack of resonant hall ambiance to give the production some extra degree of realism. Still, it outclasses a lot of its more costly competitors, even though one must consider that the Szell recording on Sony (and remastered splendidly by HDTT) is only a couple of dollars more and far more affecting.

As of this writing I had also heard Leaper's fine recordings of Mahler's Third, Fifth, and Seventh Symphonies, and I understand Arte Nova have made most of the rest available, too. It is a series at least to consider.

To listen to a few brief excerpts from this album, click on the forward arrow: